Thank Newt Gingrich for the Republicanism of Today 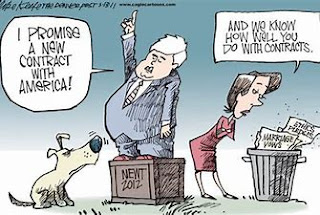 Think back to 1995 when Newt Gingrich took over a Republican House as the new Speaker. You might remember that he was the architect and co-author of the "Contract with America," introduced six weeks before the 1994 Congressional election. Republicans gained 54 House and 9 U.S. Senate seats, flipping both chambers. The "contract" represented significant changes to policy...

So much for GOP intentions but at least there were some actual goals in Gingrich's lunacy. Well, he's back and is dealing with a wanna-be Speaker, Kevin McCarthy. The big problem is the Republican Party has no agenda, and apparently Gingrich was sought out to create one, or at least something that would pass for a new plan. Dana Milbank of the Washington Post says...

"the choice is perfect, in a way unintended by the upwardly failing McCarthy. Gingrich, leader of the Republican Revolution of 1994, bears a singular responsibility for precipitating the ruin of the American political system. So it’s appropriate that he is returning for what might be American democracy’s final act." 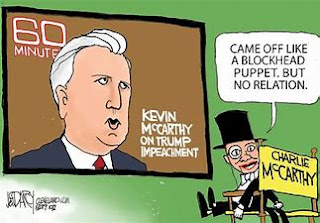 This is how Milbank sees Newt Gingrich's tenure as Speaker...

"Before and during his four-year reign as speaker of the House, Gingrich pioneered much of the savagery we see today: treating opponents as criminals, un-American and subhuman; using shocking language; perpetrating a grinding attack on the press; and sabotaging government operations and institutions."

In his new role Gingrich started with a warning to the House lawmakers on the Jan. 6 investigative committee accusing them for the "kind of laws they are breaking" and threatening jail time. Paul Waldman, also of WaPo, says the new "contract" will end up a "Myth" just like the old one where Gingrich claimed people voted for Republicans which resulted in a sweep of Congress. And the myth endures...

"when Republicans decide they need an agenda, it means trotting out some new version of the “Contract With America.”

Here with another WaPo vewpoint, Jeff Stein and Laura Meckler, the GOP claims it 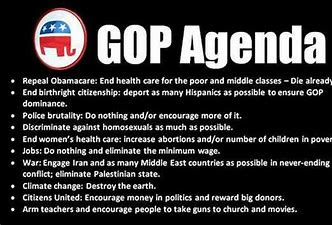 does have an agenda, albeit coming from two morons like Kevin McCarthy and Steve Scalise...

"Republicans are expected to focus their new platform on education policies aimed at tapping into parental discontent; countering the rise of China with new economic measures; and “oversight” of the Biden administration. They are also looking at invoking other traditional GOP goals such as cutting taxes, restricting immigration, criticizing Silicon Valley and repealing environmental rules."

It is no doubt likely the American public can count on “oversight” of the Biden administration, cutting taxes and restricting immigration, mixed with the typical Republican lies and corruption. But absolutely nothing constructive. Hopefully the well-informed voter will see through all this bullshit and save us from the radical right carnage of our country.