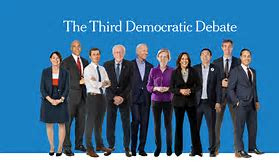 If we could wrap all ten Democratic contenders from last night's debate in a neat package of two, we'd have great candidates for 2020. RealClear Politics defined it, "10 Candidates, 10 Strategies on Display." And there lies the diversity of the Party of the Left, with little animosity, unless you consider Julian Castro's attacks on Joe Biden. Castro said they weren't personal, and they weren't really attacks, rather strong disagreements.

Taking it from stage right, Amy Klobuchar, from Minnesota, who makes a lot of common sense, but only ranks 1.2 on the RealClear Politics polling. Her primary statement was, "if you feel stuck in the middle of the extremes in our politics and you are tired of the noise and the nonsense, you've got a home with me." She is definitely against Medicare for the Medicare for All proposals championed by Sens. Bernie Sanders and Elizabeth Warren.

Next, Corey Booker, talking about growing up in unsafe Newark, NJ neighborhoods, and definitely on the band wagon for more gun control, when asked by Dana Bash if Joe Biden is too old, replied definitely not. But, on the other hand, he was concerned about Biden's meandering, in the past and on that evening. In addition to gun violence, Booker reminded us of the problems with our water supply nationwide. He is 2.3 in RCP.

Pete Butigieg talked about coming out, and will likely lend support for the LBGTQ community if elected. Butigieg had an earlier surge, and there was talk that he would at least come in as a potential vice-presidential candidate, but he has lost ground and comes in at only 4.8 on RCP. He made the statement, “This is why Presidential debates are becoming unwatchable,” referring to Castro's attack on Biden.

And then there's Bernie Sanders, who should be President of the United States today, but for a DNC unethical move by Debbie Wasserman Schultz, is second on RCP with 17.3. There would be no Democratic Party today without the Bern, even considering his leftness, it is far more discernable than the politics of Nancy Pelosi/Chuck Schumer. Think Bernie was losing his voice last night, but only physically, since his political voice will live on forever.

Joe Biden was, well, Joe Biden, and thankfully no huge gaffes last night. Julian Castro said his challenge to Biden was not personal, but I wonder if there is some movement to unseat the former vice president from his number one position in the polls. Joe Biden is a solid 26.8, leading Bernie by almost 10 points. Biden is able to 'work across the aisle' as is described by many, but in my mind is too moderate for the new wave of Progressives he just doesn't understand.

CNBC says Elizabeth Warren is rising in the polls [16.8 RCP] due to a base "more intense than any other candidate." She, along with Bernie Sanders fought with Joe Biden on Medicare for all; Biden prefers to just improve on Obamacare. My gut tells me the pair will not sell MFA until they make it clear how it will be paid for, using actual numbers. It wouldn't bother me to get rid of health insurers, but that may be a hard sell. Warren still favors reigning in corporate America.

Kamala Harris was riding the high road for a while, but apparently hit a speed bump. Her primary thrust was and has been against Donald Trump, although following the debate she chided ABC for asking no questions about abortion and reproductive rights. She is fourth in the polls at 6.5 RCP, which has been a plateau for her recently. A body language expert said she was less passionate than other candidates in the first hour. Her big money supporters were watching.

Beto O'Rourke brought the audience to their feet with applause when condemning assault weapons and saying he is for a mandatory buyback law. He was criticized saying this would certainly help Republicans in 2020. I don't think so, and if I'm wrong the voting public is completely hopeless on gun control to save the lives of innocent Americans. You have to wonder if O'Rourke is a bit too early but a prime candidate for 2028? He is 2.8 on RCP.

Andrew Yang wants to save traditional retail and attacked Amazon to make his point. He also suggested a $1,000 monthly giveaway for an entire year to 10 American families, if you believe that you can solve your own problems better than any politician. This drew chuckles from other debaters, and one deemed the idea at least original. Later, he said he left the debate not “encouraged” for the Democrats’ future. He is 3.0 on RCP leading O'Rourke and Booker.

Finally, Julian Castro, already mentioned criticizing Joe Biden for his contradiction. Castro also attacked Biden for his references to former President Barack Obama throughout the primary campaign. This I don't understand since Biden was an integral part of the Obama administration. He is only 1.0 on RCP but at one time was considered an up and comer in the Democratic Party. This debate was no help