The American Dream must be saved #2

The Dreamers dream on... 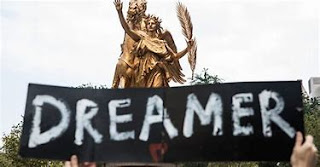 Earlier this morning it was all about the migrant dreamers who have become seriously discouraged with the American dream as it is interpreted by Donald Trump. The Oval Office lunatic has all but eliminated this foundation of U.S. democracy and replaced it with a tyrannical government that abhors anything that doesn't look like, well...Donald Trump. Actually T-rump is an ugly, repugnant site that most American would like to be rid of....in 2020.

Tawheeda Wahabzada, whose Afghan parents had earlier sought refuge in Canada but then came to the U.S., has all but given up hope for citizenship any time soon with Donald Trump running the show, and is considering self-deporting back to Canada. It isn't just Trump that is to blame...


"Nancy Pelosi and Chuck Schumer would rather have the issue of unauthorized migration with us forever, because if they were sincere about solving the problem how would they leverage vulnerable constituencies for votes?"

The Pelosi/Schumer attitude could easily be one reason that Hispanics have lost confidence in Democrats and also part of the logic why they don't come out to vote. On the other hand, "Wahabzada holds a master’s degree in global policy studies from the Lyndon B. Johnson school at the University of Texas in Austin," and could make a major contribution to this country. There are hundreds more out there like Wahabzada that work hard and...pay their taxes.

On another front, "Many [migrant] mothers detained in border stations this summer reported the health of their children worsened while in custody, recounting bouts of fever, diarrhea and respiratory illness they say were not properly treated." A flow of migrants entering the country has sent services spiraling down to the point where it has become seriously dangerous, especially for children, some of whom have died.

Border Protection officials have not explained exactly what's going on, no doubt due to the waffling policies of the Trump administration, and the fact that so many top GOP members have visited the facilities reporting there is nothing wrong. There was one case where these people were not being provided soap or tooth brushes, and, much worse...

"according to a new report from the Centers for Disease Control (CDC), there have been 921 new cases of mumps in less than a year, in or around immigration facilities."

Measles cases have also been noted. But, the question is what can the Wahabzadas of this country look forward to when it comes to freeing themselves from the shadow of a brutal autocratic government that could care less about these people. A new administration? As long as the likes of the conservative has their way, nothing will change. The light at the end of the tunnel is shining on the "Squad," Ocasio-Cortez, Ilhan Omar, Ayanna Pressley,  and Rashida Tlaib.

They are loose canons at times, but, wasn't the Revolutionary War started and finished by loose canons?
at September 05, 2019