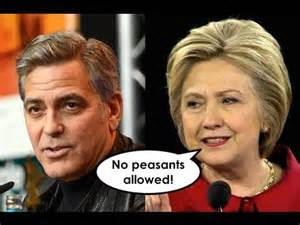 Would you pay $353,000 to sit at a table with George Clooney at a Hillary Clinton fundraiser? Even Clooney himself thought it was "ridiculous." This is his comment:


"It is an obscene amount of money, the Sanders campaign when they talk about it is absolutely right. It’s ridiculous that we have this kind of money in politics."

Bernie Sanders, of course, agrees, and has been pointing out this fact since he started his run for the Presidency, that big money owns politicians and why would the wealthy and large corporations contribute such enormous sums if they didn't expect something for it. George Clooney probably doesn't expect anything from Clinton, I suspect. After all, what could he need? My gut tells me, he is like most of the rest of us; he just doesn't want a Republican in the White House.
at April 18, 2016