Clinton campaign whines on and on and on... 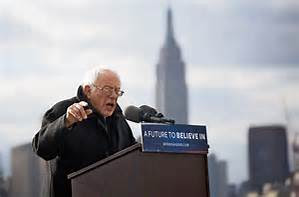 Hillary Clinton had just won 58% of the New York Primary vote to Bernie Sanders 42% when the Clinton talking heads started grumbling over the fact that Bernie is not playing fair. Seems that at the time exit polls gleaned from respondents that 46% felt the Clinton campaign was more unfair, only 34% for Sanders. In added comments, "...66% of Democrats said the primary contest is 'energizing' the party," according to CNN.

Chief whiner, Jennifer Palmieri, Clinton's communications director, says that "...the Sanders campaign 'has been destructive' to that point that he is 'not productive to Democrats' and is 'not productive for the country.'" What she is really saying is that the Bern is an Independent, not a Democrat, and the fact that he has won so many primaries against Hillary is embarrassing the party. What she fails to mention is the fact that Bernie Sanders is consistently committed.

But the numbers are that Sanders won 106 delegates in New York to Clinton's 139 for a total of 1,199 pledged to 1,452 respectively. Clinton has 489 superdelegates to Sanders 41, a hefty lead that could be whittled down with the upcoming primaries. Bernie's position, and it is a reasonable one, is that superdelegates will start changing their mind if he continues strong in future primaries, starting with Connecticut on April 26.

Another superdelegate factor includes states whose delegates have voted for Clinton where Sanders was the choice of the popular vote. Sanders adviser Tad Devine said, referring to the Clinton campaign whining, "I hear what they're saying, but what they're saying is being refuted by the voters themselves." One thing is clear, Bernie Sanders has started a revolution that the American public has connected with, and it has upset the Democratic Party process.
at April 21, 2016