For those of you on the fence for Bernie Sanders... 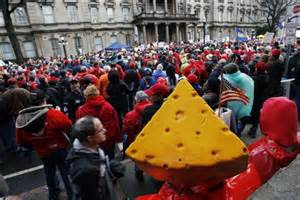 The must-win Wisconsin primary is coming up next Tuesday and this state is an example of how people have come to know and believe in Bernie Sanders giving him the momentum he needs to win the Democratic primary. Once proudly liberal, the Koch Bros.-driven Scott Walker has brought the state to one marred by deteriorating job growth whose middle class has declined more than almost any other state in the nation. This according to Pew Research Center.

But help is on the way and the folks of Wisconsin seem ready to replace Walker's backward conservatism with a new Progressive Revolution. Bernie Sanders trailed Hillary Clinton by as much as 53 points back in October. Today a Marquette University Law School poll shows him ahead of Clinton by 4.3 points (49.2-44.9). That's an uncanny 57 percent surge in just six months. So, for those of you on the edge, come on over.