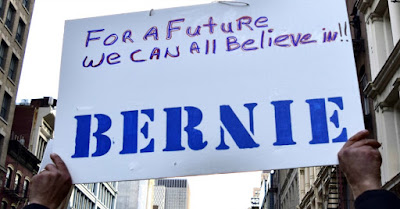 Bernie Sanders has hit a new high in his campaign for fundraising in the month of March setting a record of $44 million raised. It came from more than 1.7 million individual contributions from working Americans; it was the most successful fundraising month of the campaign. The public is not only changing its view of the political landscape, it is slowly deciding to become a part of the Bern's Revolution.

Each month donations increase--he has beat Hillary Clinton and her PACs for the last three months. It is also showing in the polls where he jumped again recently to within six points of Clinton. If you are looking at the race an either undecided or not sure if Hillary Clinton is the right candidate, you can look at where Bernie stands on all the issues here. If that doesn't make up your mind, check out this selection of Bernie Sanders posts from my blog.
at April 01, 2016