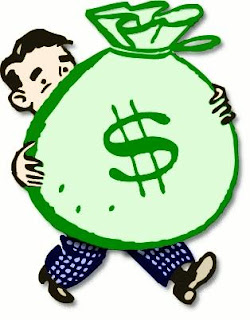 Bernie Sanders has out raised Hillary Clinton several times with his $27.00 donors, which would lead one to believe that Clinton's Wall Street and big corporate sources aren't doing their jobs. Just last month the Bern raised an unbelievable $43.5 million from working people giving just a little bit each online. I know this math isn't perfect but consider this amount divided by $27 and you come up with 1.6 million plus donors. Just in one month.

For those who wonder why Sanders is staying in the race against supposed insurmountable odds against Clinton, this figure should answer any questions. There have been comparisons with the Obama/Clinton 2008 campaign but there are two distinct differences. One, Hillary Clinton is not of the stature Barack Obama was in 2008. Two, Clinton won surprise primaries then but had no where near the momentum in 2008 that Bernie has today.
at April 01, 2016