That’s my term.  The actual words are, “ridiculous, disgusting, stupid, frustrating, childish, and a joke,” according to the Christian Science Monitor.  Just recently NY Sen. Charles Schumer (D) said the committee would fail due to the refusal by Republicans to consider tax increases.  And if that happens, the prediction is that the approval of Congress will drop to yet another low from the current 13 percent.  Only 21 percent of Americans think the panel will accomplish its goal.
The clock is ticking with the deadline Wednesday for a decision by the group of 6 Democrats and 6 Republicans.  The Economist reports the GOP has offered a paltry attempt at a revenue increase consisting of fees, sales and a host of creative ploys, including closing some tax loopholes on charitable deductions and mortgages on a second home.  But the kiss of death comes in the form of making permanent George W. Bush’s tax cuts as well as lowering the top tax rate from 35 percent to 28 percent, a definite no-no for Democrats.
﻿﻿So, in effect, Republicans have made a mockery of an offer they hope will make them look like they are cooperating in the face of the American public, when all they are hoping for is for the Dems to turn it down so the GOP can use that in 2012.  Pathetic.  Of course there is the slim possibility the GOP is waiting for a counter offer by the left, but not likely since Democrats are adamant they want “real” tax revenue increases in return for cuts to entitlements.
﻿﻿﻿﻿The official deadline to reach the minimum $1.2 trillion cut is Wednesday, but before that date the congressional Budget Office was supposed to evaluate the fiscal impact of the plan.  The latest news as this was being written was that Democrats had rejected the latest proposal from Republicans that would curb deficits by $545 billion over the next decade.  The Dems termed it just “halfway” because there was only $3 billion in tax revenue.

﻿
﻿﻿ What happened to the Millionaire’s tax that is backed by 75 percent of the American public?  One of the reasons for this is that the average big-business CEO pay is $9.6 million annually.  Another, 25 percent of millionaires are taxed less than the middle class.  If this 5.6 percent surtax on the super-rich were applied, it still would only put the top rate for the wealthy to approximately where it was during ’s administration, when he turned record deficits into surpluses. 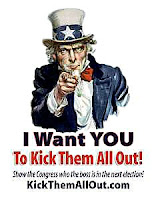 If the committee doesn’t reach an agreement, there will be automatic cuts in defense and domestic spending starting in 2013.  It will also piss off an American electorate even further that will hopefully go for the jugular in 2012.  This kind of inability to negotiate for the benefit of the country in general is truly grounds for the concept that has been circulating for some time now.  Replace Congress!


Latest Developments: The deficit committee was reporting Sunday that negotiations have ended and the latest activity is trying to figure out just how to release this to the American public.
﻿
﻿﻿﻿
at November 21, 2011