Barack Obama at the crossroads 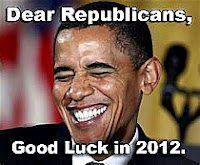 Some are predicting gloom and doom for the President, yet others say he has a good chance in locking up the 270 electoral votes needed to win.  He had 365 in 2010 with nine considered toss up, five leaning Obama, and thirteen solid Obama; but 2012 is likely to be very close.  The site above provides some interesting insights into his win in 2012, and a clear roadmap to what he’s up against next year.
As an example, solid states like may prove impossible to reclaim with an unemployment rate there of 11.1 percent.  , with one of the highest foreclosure rates in the country could now be leaning right.  John Avlon on CNN News tested the theory of top political experts that says “…you can gauge a president's chances of re-election by looking at just a couple of key indicators -- job approval, unemployment and growth in gross domestic product.”  He concludes there is no reason for overconfidence for Mr. Obama.
﻿
His approval rating is 45 percent compared to Nixon, Reagan and Bill Clinton who had 49 percent at the same point in their administrations.  The closest unemployment rate to the current 9 percent was with Ronald Reagan at 8.5 percent.  And with this considered, Obama actually stands tall with the 45 percent, along with a personal approval rating of 70 percent.  What the former presidents didn’t have to contend with is today’s home foreclosure market.

One of the President’s biggest problems now is the ongoing European crisis, escalating up and down on almost a daily basis.  gets repaired then starts going down the tube.  Conversely, the two things that Obama has to shout about are the killing of Osama bin Laden, and the death of the dictator Muammar Gaddafi.  But Avlon notes that other figures are against him with American conservatives measured at 40 percent and liberals only 20 percent.

Back to the Electoral College, Chris Cillizza, writing for The Washington Post says Mr. Obama “…still retains several plausible pathways to the 270 electoral votes he needs.”  Cillizza even thinks he can lose important states like , , and and still win.  Further, the President’s 2010 election win with 365 electoral votes was the largest since ’s 379 in 1996.  And Obama won three states in 2010 that no Democratic president has carried for over 20 years: , and .


Carrying this further in a Today/Gallup Poll, it determined the 12 swing states most likely to decide the outcome of the 2012 election based on their voting histories.  They are: , , and in the South; , and in the Mountain West; , and in the Midwest; and and in the Northeast.  I plan to analyze all these states in the future as well as others for characteristics that could be considered positive for Obama.

, which Obama carried in 2008 now seems to be lost to the GOP.  But Jim Messina, his campaign manager, says that could be a possibility in 2012.  The recall of Arizona State Sen. Senator Russell Pearce, a Republican, and replaced by a moderate, gives this call credence.  Then you have to consider a sleeping Hispanic population in this state coming alive in 2012.
On the other hand twice as many Republicans voice an “extremely enthusiastic” attitude for voting next year than Democrats.  This is an inherent gene for the left and if someone doesn’t improve this kind of DNA before next November there will be problems.
Of course it all comes down to who is the GOP candidate that will run against the President, and every expert I have heard from says that is definitely important.  Even with a bunch of Keystone Kops leading into the Republican Primary, there is still a dedicated group of voters on the right that would follow any one of them off the ends of the earth.  However, it looks like it is going to be Mitt Romney and the fact that he is a moderate could be a real challenge to Obama.
at November 17, 2011