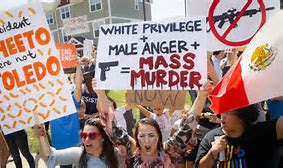 The shooter, Patrick Wood Crusius, age 21, with a legally purchased version of the AK-47, travels from Allen, Texas to El Paso and shoots 46 innocent people, killing 22 of them. He was targeting Mexicans because he felt they were invading America, the same rhetoric Donald Trump has used repeatedly to rouse his lowlife gang of followers. As if taking a page from T-rump's white supremacist book, he published a white nationalist, anti-immigrant manifesto on social media immediately before the attack. That was August 3.

Then we move on to Dayton, Ohio, just one day later, where another gunman shot 24 innocent people, killing 10, including his sister and a friend. He used a pistol configuration with a shortened barrel, chambered in .223 caliber ammunition and equipped with a 100-round drum magazine, a semi-automatic AM-15, based on the AR-15. The shooter was Connor Stephen Betts, a 24-year-old from Bellbrook, Ohio, wearing body armor. Apparently no political agenda, just hate and he liked killing people.


The El Paso shooter's mother called police with information that she was worried about her son's obsession with the AK-47 style weapon; they said it was legal and nothing they could do. Neither pursued the situation so it stopped there when the police should have asked more questions and the mother should have pushed on. Likewise, although the Dayton killer wasn't that political, he had retweeted posts that supported the Antifa movement and opposed U.S. Immigration and Customs Enforcement (ICE) agents and police officers. He was obviously violent.

And then after all the violent gun carnage, Senate head, the bottom-feeding Mitch McConnell, refuses to reconvene Congress to consider gun control measures that would have prevented this mayhem. Donald Trump expresses some support for gun control legislation but then gets a call from his buddy, Wayne LaPierre, at the National Rifle Assn. (NRA). Nothing happens, as it has been all the way back to Columbine, then Sandy Hook, to El Paso/Dayton and the numerous gun homicides and mass shootings in between.

McConnell says he will take action in September, but now that the Oval Office lunatic has been warned by the NRA, it is unlikely that we will see any real action. Until the people of this country finally come to their senses and rebel against the gun lobby, specifically the NRA, innocent children and adults will continue to die on a daily basis on the streets and in mass murders like those recently. The blame clearly goes on the Republican Party and its partner, the NRA.