Will Congress adjourn without extending payroll tax and unemployment compensation?

﻿
While the two houses bicker over how to pay for the tax cuts with one relentless on not raising taxes, millions of Americans cannot enjoy their holidays with the thought that 2012 will only bring more financial problems.  The payroll tax cut covers 160 million Americans, and the extended unemployment compensation 6 million.  The former could cut at least $1,000 from the average paycheck next year and the latter would eliminate $300 from average monthly unemployment benefits.

If Congress takes no action, this will cancel some $165 billion from the economy in 2012.  All because we have a band of dysfunctional legislative morons in .  And folks we put them there but we can remove them in 2012.  And there is an additional issue of heading off the scheduled cut in Medicare payments to doctors next year, something that could affect future medical care to seniors.
According to CNN Money, the Democrats want a tax on millionaires producing $155 billion over 10 years.  Fannie Mae and Freddie Mac charging mortgage lenders more; estimated revenue $38 billion.  Ban millionaires from receiving unemployment benefits and food stamps saving $127 billion over ten years. 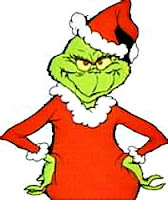 Republicans in Congress are daring Democrats to scuttle their bill that they claim comes to the aid of the middle class.  Eric Cantor (R) , bases this on tax cuts and job creation he claims is built into the GOP legislation.  It is all but certain the bill will fail in the Democrat controlled Senate.
So back to the original question.  Will this inept body be able to salvage the future of the American working public or will they go home for Christmas each laying the blame on the other side?  If this happens, they will have to face the voter’s Grinch in 2012.
at December 14, 2011