Immigrants want a part of the Occupy Movement

Several have commented that no group is more apt to be part of the 99 percent the Occupy Movement is fighting for than immigrants.  Two occupy activists, Phil Arnone, and Emma McCumber, established the Immigrant Worker Justice Working Group to help bring together these folks in a cohesive way.  IWJWG is focused on two main points: First is wage theft, wages stolen from low-paid workers; Second is protesting the private prison industry that takes advantage of poor immigrants kept in questionable detention for months or even years.
﻿
﻿The organizers are starting with education centered on the connection between corporategreed and the private prison industry that encourages more immigration round-ups to fill their prisons.  This coincides perfectly with an investigation done recently by National Public Radio on whether the crackdowns on immigration have gone too far.  NPR commented that only a year ago, the country was ripe for more immigration control legislation.  Today it seems somewhat clear that it has already gone too far.
Arizona, the flagship of immigration laws, followed by Alabama, are both seeing their legislation challenged in court, by local businesses and a part of the population as well.  In , where agriculture depends significantly on immigrant workers, it is estimated the economy would shrink $40 million without 10,000 workers affected.  Other states with similar legislation, or at least have it in the works, are , , and .
Both Occupy Movement organizers and immigration activists see great potential in bringing immigrants into the cause.  The former, to increase their numbers with a credible group of people who are deserving; the latter to educate their following and by virtue of the organization, line up those who are eligible to vote and get them registered.  The question is whether they will be able to overcome the fear immigrants have of law enforcement after going underground as a result of the anti-immigration legislation.
John Michael Torres, an activist from , worries about the ability to communicate with those who don’t have a TV or the Internet.  That is the reason for the meetings like the ones in where those who have experienced a connection with the movement can tell their story.  Maurio Munoz, who is a part of the Spanish assembly for Occupy Wall Streetsays they are offering classes with legal experts, including lawyers, to answer peoples’ questions.
Teresa Puente wrote in In These Times that “the convergence between the immigrant rights struggle and Occupy is growing increasingly profound.”  She adds, concern has been voiced “because the white activists seen as leading the Occupy movement haven’t been vocal about immigration reform.”  So activists have decided that the best way to win the attention they want is to get involved, bringing as many immigrants into the fold as possible. 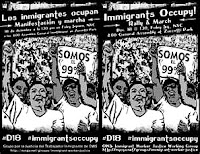 International Migrants Day was December 18, and Occupy activists marched in the Immigrants Occupy! Rally in at Foley Squareled by the Immigrant Workers Justice Working Group.  Here is their statement:

“We recognize globalized capital–in the form of financial institutions, multinational corporations, and neoliberal state economic policies–as the impetus for economic migration to the United States, and deplore the fact that banks and corporations, supported by the government, continue to profit from immigrant detention and deportation. The leadership and participation of immigrant workers is necessary for any discussion of social, economic, and environmental justice.”
at December 26, 2011