What does being an Independent really mean?

﻿When the Independent voting movement began to get wind in its sails, a group called the Committee for a Unified Independent Party (CUIP) was formed and has become the spokespeople for those who don’t wish to be connected to either political party.  There are a lot of those folks these days and the ranks have swollen to 40 percent of the voting public.  They have helped decide recent elections and will continue to do so in the future.  The big question for most of us is what do they look like?

According to Sarah Lyons, Director of Communications for CUIP, The Washington Post called them “The Misunderstood Independent.”  If you were a former Democrat, you might have joined the group because they sounded like a bunch of progressives.  If coming from the Republican side, you might have imagined the makeup was more conservative.  Well, it’s neither, at least in specificity, rather a formerly meandering crowd of disgruntled voters that found their way with the amazingly simple designation of Independent.
﻿
CUIP was there to pick up the pieces and mold these wanderers into a meaningful body of serious voters that are passionate about their country, but have demands that don’t neatly fit into the Dems or GOP framework.  CUIP has not pursued a third party and there is no central manifesto on which they operate.  You have to learn to understand this philosophy or trying to figure out an Independent will drive you crazy.  Pew Research says it is Americans trying to ditch the kind of partisanship that has brought Congress’ approval rating to the lowest ever. 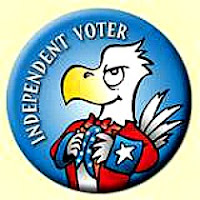 If you look at the Pew study, "Beyond Red vs. Blue: The Political Typology,” it makes it clear that Independents aren’t the center of the American political system; they are in fact a contradictory band of individuals who have strong beliefs that they want to see materialize in Washington.  And they don’t feel the job is getting done by either Republicans or Democrats.  Linda Valdez of the quotes Vincent Hutchings, professor of political science at the , as breaking down Independents one-third each Democrat, Republican and true independent.
Lyons of CUIP says Pew came up with the same findings they have during their organization of Independents over the years:  “Independents are not in the middle between Democrats and Republicans. Rather, they want to move beyond the confines of parties altogether.”  She adds: “independents are attuned to the fact that partisanship is not a behavioral issue—it is a structural one.”  They are questioning the very structure of the current political system and want to do something about it.  Like adding open primaries and nonpartisan elections.
But if the Independent threat in their numbers is meant to change Congress from its dysfunctional state, it has failed so far.  At least on the GOP side that refuses to even consider raising taxes on the rich.  An interesting recent survey came up with the fact that more than two-thirds of Americans want to increase taxes on the wealthy, including a majority of Republicans.  Even larger numbers feel that Medicare and Social Security should remain untouched.  If I was the GOP, and I mean at every level of office in this country, I would be scared to death.  But the question, of course, is will these people vote their opinions or fall back into the rut of backing a comfortable incumbent? 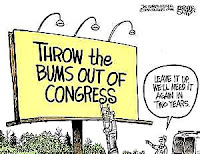 The movement to remove members of Congress in-mass is a valid cry for help from the American public.  All 435 House members and one-third of Senators are up for reelection every two years.  We have a chance to knock off all of the House and a third of the Senate in 2012.  If we don’t complete the job next year, there’s still 2014 to get the rest of the House and another third of the Senate.  Maybe even put some Independents in office.  By then if we haven’t scared these morons in and convinced them who they are working for, we finish the job in 2016.
at December 12, 2011