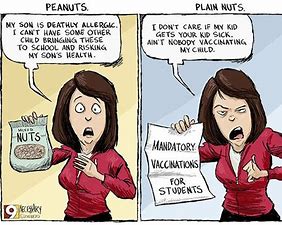 There are gun nuts, and then there are anti-vax nuts. Right now it is the latter who are killing innocent American citizens. I feel sure all the fair-minded and lucid thinkers of the U.S. wholeheartedly welcome this headline from Daily Beast: "America’s Finally Telling the Anti-Vax Nuts Where They Can Go." Many of us bloggers have ideas of their potential destination and just today I have come up with, outer space, a location befitting their far-out beliefs.

It is perhaps a coincidence that as I began to construct this post, a friend of mine received a phone call from an anti-vaxxer, anti-masker, anti-distancer and anti-anything else that is based in scientific fact. It was a long and frequently confrontational conversation because he is just as sure of his position in intelligence as the anti-everything on the other end. This person is a confirmed know-it-all with a perspective intensified by the defense of her position.

Here's a gaffe made by this person during the debate that throws the whole anti-bunch movement out of kilter. The talker doesn't believe in the science of vaccines but does believe in the fact that, by having had coronavirus, antibodies are created that protect her in the future. Isn't that science? My friend didn't press the point because the opposition throws up a shield for anything fact-based, saying the 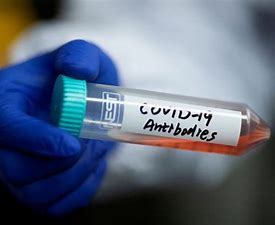 people we follow are afraid to tell us the truth.

This individual is living with a built-in obstinance of logic. Science Daily says...

infants are capable of deductive problem solving as early as 10 months of age, a new study by psychologists at Emory University and Bucknell finds.

Is it possible there is a wire loose in the brains of the anti-science group and, if reconnected, it could solve the Covid-19 pandemic? If only it could be this simple, but, no doubt, there would be thousands of excuses to deny surgery. Sometimes I wonder if they enjoy this kind of independent beligerantism. Did I just coin a word? Here's another headline from The Daily Beast...

"One Thing Will Save Us From These Suicidal Lunatics—Mandates"

Here are some examples from New York city, which is supposed to be somewhat sophisticated,,,

One of the points this anti-science person made on the phone was that Covid-19 is no worse than the annual flu. I did some research and re. this she was so far off it is laughable. In the 2019-2020 flu season, according to the CDC, there were 20,000 flu-related deaths. Johns Hopkins Univ. reports there were 352,000 coronavirus deaths in 2020. And already in 2021 353,000 deaths from the virus. Logic would indicate it is downright foolish to compare the two.

The 1918 flu pandemic which killed 50 million was a wake-up call for the treatment of viruses. Covid is brand new with scientists facing a virus so far they aren't even sure where or what it came from. But did you know that misinformation spread during 1918, like in 2020, but at that time they didn't have platforms of social media that are available today. In my wife's discussion, the other side listed the hospital where she worked as her source. Today, misinformation is a business.

And the word is also being spread by politicians questioning the validity of the virus making it near impossible for the uneducated to know what to do. Here is a classic example...

This blithering idiot is from New Hampshire and is typical of what some GOP lawmakers in Congress come up with regularly.

Science will prevail, must prevail, if we are to survive this pandemic. One can only wonder if these lunatics will ever realize the truth.