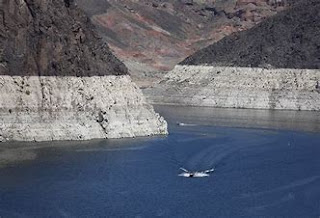 We're in a 20-plus-year drought here in the West and now the US government declared a water shortage on the Colorado River for the first time in history. And who get the brunt of all this? The animals! We live in the suburbs of Phoenix, AZ  and regularly see coyotes, bob cats and javelinas come out in the open looking for water. There will also be mandatory cuts to water for Zonis who cherish their swimming pools.

"Some 40 million people rely on the river for water, contributing to its decline — to say nothing of the nearly 5.5 million acres of farmland that it irrigates."

Although most of the yards are covered with granite here, some do have grass yards, mostly migrated mid-westerners. This requires enormous amounts of water, particularly when the temperature peaks over 100 degrees, as it has regularly this summer. "Wild animals can die of dehydration, but many of the major impacts of drought are far less obvious." Please take the time here to find just how all the animals are being affected, keeping in mind they are helpless in some situations.