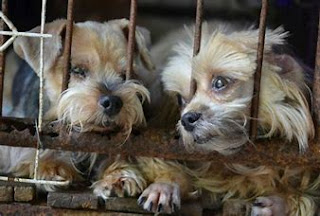 Don't believe that puppy mills are designed strictly for the purpose of the fulfilling of a little girl's or boy's dream of having their very own pet. Not on your life or the animals that are abused on their way to the pet store. Yes, Petpedia says...

"The majority, if not all, puppies in pet stores come from puppy mills that can make even the most atrocious jails look like a haven." 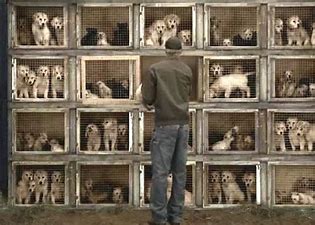 Prisoners in a jail had a choice. These pups do not and the approximately 10,000 puppy mills in the United States are doing what they do for one reason. To make money. Petpedia states less than 3,000 are regulated and puppy mill death statistics are not reported. What we have here is an example of abhorrent treatment of innocent animals that cannot protect themselves, with the birther female used over and over, then discarded or worse when no longer able to produce. 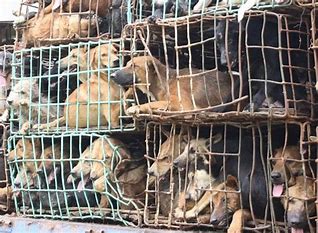 Did you know that some puppy mills produce animals that are used in labs for animal testing? There are also groups that oppose using animals for testing like those who are against puppy mills. It's cruelty, plain and simple, and a clear illustration of how some lowlifes place money over a living thing. Would this country allow baby mills to operate in this manner? I think not and neither should the government permit puppy mills.
Here's a statement from the U.S. Humane Society that pretty much explains what the animal groups are up against...

"A puppy mill is an inhumane high-volume dog breeding facility that churns out puppies for profit, ignoring the needs of the pups and their mothers. Dogs from puppy mills are often sick and unsocialized. Puppy mills commonly sell through internet sales, online classified ads, flea markets and pet stores."

The key word in this statement is the word, inhumane; do you agree that there 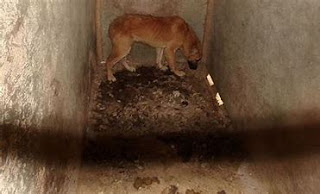 should be stronger laws preventing any inhumanity against animals? In Germany you can go to jail for 3 years for cruelty against animals. And Ukraine, Russia, Argentina, Chile, Colombia, Canada, Brazil, Japan, the US and Australia are all phasing out animal testing of cosmetics. However...

"Despite progress in humane product testing and bans on animal testing for cosmetics in other countries, the United States has no national law prohibiting the use of animals for cosmetics testing."

We are pathetic in our prevention of cruelty to animals, which clearly shows a lack of integrity in the American people. Were it not for animal lovers, you might wonder how bad this situation could become. How many times have you heard, "It's just an animal?" Here's another quote from the Humane Society...

"Mother dogs spend their entire lives in cramped cages with little to no personal attention. When the mother and father dogs can no longer breed, they are abandoned or killed. Due to poor sanitation, overbreeding and a lack of preventive veterinary care, the puppies from puppy mills frequently suffer from a variety of health issues, creating heartbreaking challenges for families who should be enjoying the delights of adopting a new family member."

Animal rights people are fighting a war that needs your help. As an example, Arizona Gov. Doug Ducey signed legislation in 2016 to kill the ability of cities to keep pet stores from selling commercially bred animals. We are talking about animals from puppy mills and although Dufus Ducey is a dull-witted Republican, I suspect there are Democrats that would do the same. Here are the disheartening figures about puppy farms...
Those are the facts. Now it is up to the American public, and I don't mean just animal livers, to help in any way possible to abolish these puppy mills with your generous donations, volunteering and contact your representatives in Congress. Together we can do it.
Read more here and here.
at August 26, 2021