As long as the gun rights fanatics won’t negotiate, the killings will go on

NCCI Holdings, a company involved in workplace data, just released a new report on workplace violence.  According to the U.S. Dept. of Labor, nearly 2 million American workers each year report that they have been involved in some kind of violence where they work, which includes threats, physical assaults and homicides.  The Bureau of Labor Statistic says 11 percent of those incidents were homicides, the fourth-leading cause of occupational injuries. 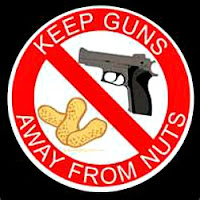 An important NCCI finding which has not been played up by the media is the fact that 80 percent of workplace homicides were caused by guns, compared to 10 percent by stabbings.  This report was released just two days before the massacre where a mentally ill gunman injured U.S. Rep. Gabby Giffords, also injuring 14 others and killing six.  No particular connection to the workplace but an example of loose gun laws that allow a deranged gunman to buy a weapon.
The National Rifle Assn. (NRA) is even for keeping guns out of the hands of individuals trying to purchase a firearm but they aren’t championing the cause.  They are afraid that it will show weakness and their message is one of fear (that someone will take their guns away) rather than negotiation on things like background checks, the gun show loophole and concealed weapons laws.  So they whip their membership into a frenzy to deny anything that smacks of sane gun control.
﻿

A recent post I did on the issue, “New York’s strong gun laws make state safer than weaker states of Arizona and Texas,” brought me a conglomeration of comments from these NRA trained fanatics.  Some of their points are worth considering because there are always two sides to every argument.  Many are just very inane and an affront to any intelligent human being.  But not once does either group admit there are major problems with our gun laws like a lack of background checks, the gun show loophole and concealed carry.

There was a recent article by Leonard Pitts, Jr., Pulitzer Prize-winning columnist for the Miami Herald that blames firearms for much of the political change in this country.  Like the fact that Arizona Rep. Gabby Giffords was forced to leave Congress due to the reckless use of an easily available handgun.

He recounts past instances in our history with similar outcomes like the assassinations of Abraham Lincoln, James Garfield, William McKinley, Huey Long, Malcolm X, Medgar Evers, the Kennedy brothers, George Wallace, Martin Luther King and others.

Citing Jared Loughner’s easy access to the semi-automatic Glock 19 he purchased at the Sportsman’s Warehouse outlet in Tucson, , Pitts exclaims that Loughner was able to acquire the gun despite the fact that he had been rejected by the U.S. Army and kicked out of a community college due to his behavior.  Pitts continues this line of thought with, “Which suggests that, while Loughner may be unbalanced, American gun laws are downright insane.”  I couldn’t have said it better.
Pitts also has an opinion on the refusal of the gun lobby to allow the banning of automatic high-capacity magazines: “The hunter who needs a gun that fires hundreds of rounds a minute isn’t much of a hunter.”  Amen!  And he even cites the political left for its crusade to get rid of all guns instead of concentrating on the specific issues of just making it harder for the bad guys to obtain them.  Just like the political right led by the NRA won’t give an inch.
Yes, the killings will go on if we don’t find some means for conciliation, and that includes both sides of the issue.  Pitts comments that this whole fiasco reflects the will of the people and that is tragic because they are the ones getting killed.
at February 06, 2012