It was July 2, 1964, when President Lyndon Johnson signed into law the Civil Rights Act that outlawed major forms of discrimination against African Americans and women, including racial segregation.
﻿
﻿

It was bad enough that a troubled, less-than-capable head of state Jan Brewer greeted the President of the to with a finger-wagging in his face in an attempt to dominate him.  That was more than adequate to prompt charges of bigotry against the leader of a state known for its racists and an intolerant conservative legislature that, along with much of the state’s population, also hates Hispanics.
Now Brewer is not the greenest saguaro in the desert but Politico thinks she has ignited a “firestorm” around the potential of race becoming an issue in the 2012 election.  And there is no state better than to coddle this movement with known racist, bigot and recalled state Senator Russell Pearce and his buddy J.T. Ready, another racist and also a neo-Nazi, to fan the flames.  However, jaundiced Jan didn’t stop with her finger in the face of Barack Obama.
Following the incident and on Fox News and various other media outlets, she offered up several versions of the incident.  She accused Obama of being “thin skinned,” and said that she felt threatened by his attitude.  Harry Shelton, Sr. VP for the NAACP commented: “What were you afraid he would do, steal your purse?”  Although there are those who support her in , she and other state politicians like her continue to bring unbridled ridicule to the state. 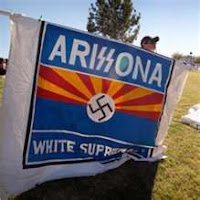 The Rev. Jesse Jackson pointed out that we are celebrating the 150th anniversary of the Civil War but are seeing an awakening of the States’ Rights movement of the 1940s, that fought the federal government because of its opposition to federally mandated racial desegregation.  I grew up during that movement and experienced several Dixiecrat Party political rallies in that opposed integration.  The party was formed in 1948 and dissolved in 1948.

PoliticusUSA says the fact that we have a black President doesn’t indicate any progress toward race equality.  Further, “The racism in is not limited to hatred of African-Americans, and the past year’s negative rhetoric against immigrants, the poor, and Muslims has been a display of white supremacy that has permeated the general population and many of our politicians.”
In other words, the feeling of superiority over others knows no bounds when they are different than we are.﻿
PoliticusUSA also said, “Conservatives’ attacks on ACORN, NAACP, and the Southern Poverty Law Center were not for their activism or defense of civil rights, but an attack on African Americans.”  Their concern is rooted in the fact that blacks, Hispanics and other minorities will eventually organize and use their voting power to oust the conservative bigots and make equal rights mean what the Constitution originally intended.
If you want a demonstration of Arizona racism, you must see the following Russell Pearce and J.T. Ready video:
﻿
Politico reports, “An AP-Ipsos poll taken just before the 2008 election showed that Obama’s support would have been as much as 6 percentage points higher had he been white.”  Because of the concerns over the economy, this “racial bias” will be played down in 2012.  Although the racial effects were there in 2008, they didn’t decide the election, according to Tammy Frisby, a research fellow at the conservative Hoover Institution.
﻿
﻿

If you must have your specific illustration of racism against Barack Obama, Politico says it is “visceral,” providing the following example: “That was true in 2008 — when a handful of rabid Obama haters sent out emails that included crude caricatures of Obama as a Muslim, a monkey, Buckwheat or worse.
Mary Frances Berry, former chairwoman of the U.S. Commission on Civil Rights, thinks we should focus on how the President handled the tarmac finger wagging and ignore Jan Brewer’s motives.  Obama characterized the moment as “no big deal” and moved on from there.  Unfortunately, , and much of the rest of the nation, isn’t able to do the same.
at February 27, 2012