Why Would 18 Million Americans Be Willing To Kill Over Politics? The Answer is Donald Trump 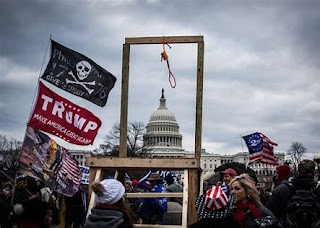 In a recent CNN poll, 79% of the American public feels the United States is going in the wrong direction. This is up 11% since Spring. Correspondingly, President Biden's approval rating stands at a dismal 38%, with a 62% disapproval. Economic pressure is the leading contributor to all this with 75% pointing to inflation as the primary factor. The outlook...

"With midterm elections approaching, the poll finds no indication that Biden's standing with the public is improving -- and among some critical constituencies, it is worsening."

Washington Post columnist, Max Boot, agrees: "I used to be optimistic about America’s future. Not anymore." This says it all and is an indication that we have gone through a period of turmoil that many think was avoidable, and things have changed radically: The turmoil would be Donald Trump in the Oval Office. He spawned the era of hate and turned the Republican Party into a gang of vote stealing, corrupt and immoral would-be lawmakers.

Capitol Rioters Wanted To Capture, kill Lawmakers, Prosecutors Say...
But here's the scary part...this recent statistic. "One in five US adults condone ‘justified’ political violence." The radicals claim, "alienation from democratic institutions," which doesn't fly when you consider these same misfits take advantage of these democratic institutions. A team of medical and public health scientists at the University of California, Davis, after surveying 9,000 people across the country, learned the appalling truth...

"The prospect of large-scale violence in the near future is entirely plausible,” the scientists warn.

But it gets even more frightening,,,

"A hardcore rump of the US population, the survey recorded – amounting to 3% or by extrapolation 7 million people – believe that political violence is usually or always justified. Almost one in four of the respondents – equivalent to more than 60 million Americans – could conceive of violence being justified 'to preserve an American way of life based on western European traditions'”.

"Most alarmingly, 7.1% said that they would be willing to kill a person to advance an important political goal. The UC Davis team points out that, extrapolated to US society at large, that is the equivalent of 18 million Americans."

You have to wonder if one of these maniacs is your neighbor. And here's a conclusion gleaned from a survey of 417 of the Jan. 6 attackers taken by Harvard Institute of Politics: An overwhelming number said they were there because former President Donald Trump told them to be. And that, folks, is the scariest part of all, answering the question, 'Why Would 18 Million Americans Be Willing To Kill Over Politics?'
at August 05, 2022