I know what many of you will say, 'Don't give them anything because it discourages them from going back to work." And that would be bullshit, except, perhaps, for a select few. There are those who prefer the streets over a normal home arrangement, or even a shelter, and that is a problem that must be solved. But there is also a preponderance of homeless folk who have fallen on tough times with eviction, financial problems, unemployment and more.

The person we gave the money to was a Black man and he was very appreciative. My wife blessed him and I told him to take care of himself, like the $5 would give him a path back to his dignity. Of course it wouldn't but hopefully it will provide enough food and drink to keep him from starving. And he didn't look like the kind of guy who would spend it on booze. We do this regularly, my wife making sure there is always a 5-dollar bill available in the car.

Rising rents and inflation nationwide leading to spike in homelessness...
And, if you think this is wrong...tough! According to last available 2020 figures, there were 580,466 people experiencing homelessness in America. We are the richest country in the world and we have more than a half-million people who are without a place to live. There are more than 1.5 million non-profit organizations in the U.S. which you would think could have at least some impact on this issue. But there are still people, some are children, begging on our streets. Unconscionable!

The National Alliance to End Homelessness has plenty of facts for anyone interested in this dilemma. For example, the Alliance says, "Risk is significantly tied to gender, race, and ethnicity." For example...

"Males are far more likely to experience homelessness than their female counterparts. Out of every 10,000 males, 22 are homeless. For women and girls, that number is 13."

Race is a significant factor. They are "more likely to be disadvantaged within 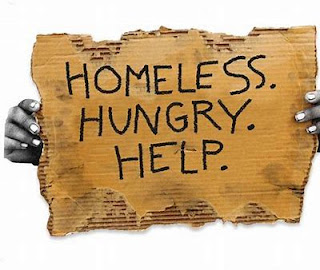 housing and homelessness spheres." This could be caused by higher unemployment rates, lower incomes, less access to healthcare, and higher incarceration rates. I don't know the reason the Black man we gave money to was on the street, but I reiterate, he was very appreciative...you could see it in his eyes. The figures aren't real clear but people of color do have the highest homeless rates.Say what you want about Jeff Bezos being the richest person in the world but in 2018 he did donate $98.5 million to 32 organizations in 23 states that are helping homeless families. Note, Bezos spread it around so one huge organization wasn't in control. What if each millionaire/billionaire donated $100 million to the cause, combined with an educational program that puts social workers on the street? If that is asking too much then the wealthy of the U.S. are greedy and selfish.
In closing, and to answer the question of, 'Should a Homeless Person be Rewarded for Being Homeless? Hell Yes! But more than this, we must get to the seat of the homeless problem, We can only hope that those with the money to spare in this country--and you know who you are-- will come to the trough of giving with enough to help those 580,466 who can't help themselves. PEACE!
at August 12, 2022