The epitome of the disgusting is Donald Trump 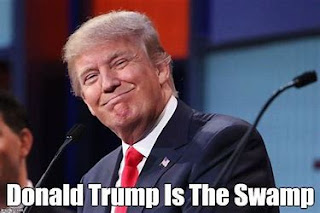 Remember Donald Trump's often touted book, "The Art of the Deal," something he hasn't been able to accomplish since being in the White House? Well there's another twist from the book's co-author, Tony Schwartz, who revealed a shocking observation...


“To know Trump is to hate Trump,” said Schwartz. “Meaning everybody who knows him, deep down, hates him completely.”

Not really shocking is it? Actuall,y that isn't the real shocker; This is even closer to home, that his oldest daughter, Ivanka, "despises him," can't stand him anymore. Of course it's hard to tell with all of the "sweetness" we see between her, Jared Kushner and Daddy Warbucks. Schwartz's reasoning...


“When you’re around a person who devalues you, humiliates you, ignores you, shames you, what possible other reaction could you have other than to despise him?”

Trump was in Orlando last week to kick off his 2020 presidential campaign--many say that he's never stopped campaigning since 2016--but is it significant that Orlando is a city completely enclosed by swampland? This is certainly appropriate considering the Oval Office lunatic's promise entering office was to drain the Washington swamp. He didn't and what we ended up with was an even bigger quagmire of corruption led by none other than the professed liberator.

But it is even more laughable that just hours before Trump's campaign kickoff in Orlando, the Orlando Sentinel announced that it would endorse anyone but Donald Trump. The newspaper commented...


"After 2½ years we’ve seen enough. Enough of the chaos, the division, the schoolyard insults, the self-aggrandizement, the corruption, and especially the lies. So many lies — from white lies to whoppers — told out of ignorance, laziness, recklessness, expediency or opportunity."

Wow! That's a statement that perfectly clarifies the maniac that had been inhabiting the White House now for around two-and-one-half-years, posing as a head of state for the most powerful nation in the world. Or at least it was until T-rump took office. But the Democrats don't get an official nod out of this from a paper that has a history of endorsing Republicans, rather, it's more a mandate that Donald Trump must go.

And finally, Trump has lost the support of one of his largest 2016 supporters, the wealthy Mercer family. Here's the loss...


"The Mercers supported Trump aggressively in 2016, donating at least $15.5 million to pro-Trump organizations..."

According to sources, the Mercers have become disillusioned with Trump for a variety of reasons. One, they favored Steve Bannon; Trump fired him. There were others but supporting Steve Bannon tells you enough about this family to place them in a category of the radical right of the Republican Party. Donald Trump can't afford to lose too many of this brand since it is the thrust of the GOP in all elections. One can only hope that the entire Trump campaign fails...soon.
at June 24, 2019