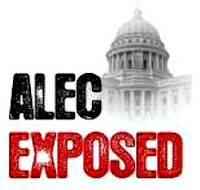 The law that is currently protecting watch captain George Zimmerman, termed “stand your ground,” was brought to the organization American Legislative Exchange Council (ALEC) by the National Rifle Assn.  ALEC, a national organization that fosters legislation primarily anti-consumer, has promoted the concept to states nationwide resulting in several laws passed similar to ’s.
It is one of the bills supported by ALEC disproportionately impacting communities of color, according to the Center for Media and Democracy’s PR Watch.  The question is whether it prompted Zimmerman to take vigilante justice into his own hands resulting in action that he was not authorized to carry out.
The American Legislative Exchange Council (ALEC) is a front for back-room closed-door sessions between big business and state legislatures to draft legislation that benefits business.  The center for Media and Democracy has been fighting this organization for some time now, and I have done two past articles you can see here and here.  One of the major problems with ALEC is its secrecy in bringing biased legislation to states that is often passed as presented. 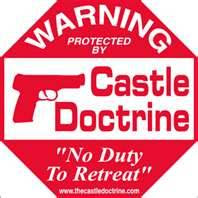 This law, also known as the “Castle Doctrine,” changes state criminal justice and civil law codes by giving legal immunity to a person who uses deadly force if they reasonably believe it is necessary to do so to prevent death or great bodily harm to themselves or another or to prevent the commission of a forcible felony.  It also bars the deceased's family from bringing a civil suit.  Additional information suggests Zimmerman acted as he did because the teen was black.
Florida Senator Durell Peadon introduced the law with NRA lobbyist, Marion Hammer, reportedly staring down legislators as they voted, according to CMD.  Afterwards Hammer presented the bill to ALEC where the NRA “boasted” it was “well-received,” after which all corporations and state legislators on the Task Force unanimously approved the bill as an ALEC model.  At last count, 25 states had the “stand your ground law.”
See Al JaZeera video below of Former federal prosecutor Michael Wildes discussing the NRA's power and the need for improved gun safety and control laws:
governor Scott Walker, a devoted ALEC alum, signed a bill into law in his state in 2011 with the key elements of the Castle Doctrine included.  On March 3 of this year, 20-year-old college student Bo Morrison was shot and killed by a homeowner in Slinger, as the young man hid from police after attending an underage drinking party.  Because of the Castle Doctrine, no charges will be filed in the shooting. Like Trayvon Martin, Morrison was black.
﻿
﻿

Former attorney Kendall Coffey says the “stand your ground” law is “a license to kill,” noting that the number of justifiable homicides in has tripled since the law was passed in 2005.  CMD says, “The Castle Doctrine and its ‘stand your ground’ provisions give license for people to engage in vigilantism without liability.  As such, the ALEC bill can put the decision to take a life in the hands of a person whose fears are motivated by prejudice and racial bias.
To my knowledge and at this writing, the NRA has made no official comment about the Trayvon Martin death, nor has it commented on the “stand your ground” law in relation to whether George Zimmerman acted correctly in his shooting of the black teen ager.  I read somewhere recently a headline that said, “George Zimmerman is the NRA.”  If that statement is correct, the incident could well be the catalyst to more gun control in the future.
Read more here.
at March 27, 2012