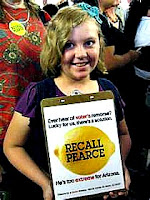 I know that many of you throughout the U.S. are hooked on Arizona politics.  After all, what better way to get a good laugh?  Today is no different. If you are following the recall election of the infamous State Sen. Russell Pearce, the first in Arizona’s history, you know there was a sham candidate by the name of Olivia Cortes.  I say “was” because she pulled out of the race Oct. 6, many say at the behest of Pearce and his gang of thugs.
If you haven’t been watching, Cortes was recruited by Greg Western of the Phoenix East Valley Tea Party to siphon off votes from Pearce’s only other opponent, Jerry Lewis.  Western, the EVTP chairman, has repeatedly said, as has Cortes, that he doesn’t know who is putting up the money for her candidacy.  Cortes had no organization and would not speak to the media.  This was all challenged in court recently by Phoenix attorney Tom Ryan who wanted her off the ballot.
But the ruling by Judge Edward Burke found Cortes did no wrong, thus, no reason to throw her off the ballot.  But when it came to the testimony of Greg Western, who just before backing Cortes professed to be an ardent supporter of Russell Pearce for years, Burke lowered the boom.  He said:
"His {Greg Western} testimony that he has no idea who designed, posted and paid for campaign signs supporting Cortes or who paid the professional circulators is too improbable to be believed.  The court finds that Pearce supporters recruited Cortes, a political neophyte, to run in the recall election to siphon Hispanic votes from Lewis to advance Pearce's recall-election bid."
An Arizona Republic newspaper opinion commented: “There can scarcely be a voter anywhere in the {Maricopa} county, much less {Pearce’s} District 18, who doesn't know that Cortes has been propped up by supporters of recalled Senate President Russell Pearce to draw votes away from his principal competitor, Jerry Lewis.”  Stephen Lemons, who writes the Feathered Bastard blog for the Phoenix New Times quoted Ryan as saying, "The Pearce forces did not want this hearing to go forward tomorrow…”
Lemons continues that Ryan’s co-counsel Micheal Wright said it was all part of a deal he and Ryan had offered Cortes' lawyer Anthony Tsontakis before the first hearing where she was forced to testify: i.e., Cortes pulls out and the lawsuit is dropped.  "This morning, they asked if the offer was still open," added Wright.  Of course there is still the question of whether laws were broken in Cortes’ candidacy and Pearce, his supporters and family will have to answer to this soon.

Laurie Roberts, an Arizona Republic columnist, had some interesting observations on the “Si se puede!” slogan that apparently originated with the mysterious crew that put up the Cortes candidacy signs.  The term is Spanish for “Yes it is possible or Yes it can be done.”  Apparently not in the case of Cortes.  For one thing, Roberts says Cortes didn’t even know what the word “incumbent” meant until last week.  Further, the columnist thinks Judge Burke basically called Greg Western a liar.  Her opinion is that after this fiasco, Jerry Lewis will probably get all the Hispanic vote.

The recall election date is November 8, and it is hard to imagine anything else as bizarre as the events that have already happened that could occur in the next four weeks.  But, then, this election is being held in Arizona and we all know that anything can happen—and usually does—there.
at October 11, 2011