Is “Occupy Wall Street” the real revolution for the real people?

The “Occupy” movement has been called the progressives’ answer to the Tea Party.  There is no comparison between the two factions, obviously in philosophy, but also in substance and intellect.  From some of the TP videos I have witnessed, those poor clods are definitely dealing with double-digit IQs.
Look at the Wall Street folks and then look at the gun totin’, dimwitted, racist bigots that have been captured on You Tube of the Tea Party demonstrations.  Although not universally representative, this bloc has not been officially rebuked by the organization.  The young, and older, people at Liberty Plaza in New York would make TPers look like boneheads.
So now that we have this dissimilarity established, what do these people want?  They aren’t quite sure yet but then, the movement is only around a month old.  The one thing they are sure of is they want the power of Wall Street and the financial community diluted.  Some signs screamed "Less is More" and "Capitalism is evil."  Sounds like candidates for a Social Democracy. 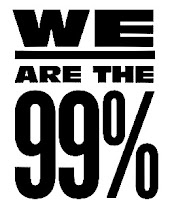 But there is a clear-drawn comparison here, and it is with Independent voters.  Not in philosophy but rather in the momentum of the movement.  Independents don’t lay down a partisan creed, but rather stand for a multitude of ideologies.  Today they represent 40 percent of the voting population and they are growing on a daily basis with crossovers from Republicans and Democrats.
“The group's lack of specificity serves a purpose because it invites outrage over a full spectrum of societal grievances,” says Bill Dobbs, another activist from the 2004 Republican National Convention demonstrations.  But “Occupy’s” thrust is without question directed at the greed of Wall Street and corporations and their accountability.  And they are willing to put their freedom on the line: 700 people were arrested on the Brooklyn Bridge.
Some did voice their specific concerns.  One said it was “corporate influence in politics;” another wants the money to be spent on “meeting people’s needs.”  Similar demonstrations have already been planned or carried out in Los Angeles, Chicago and Boston.  During the day Sunday, I heard one news report that shows the “Occupy” concept has gone worldwide.  It will be very hard to contain this movement if the White House and Congress don’t act quickly.