Will the NRA condone blasting human remains out of one of “their” guns? 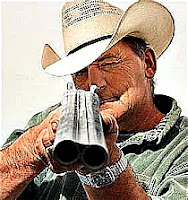 Yeah, it’s true.  Two yokels from Alabama have come up with a way to stuff the human remains of your loved ones into the gun shells of everything from a handgun to a shotgun.  They say it is the “perfect way for avid hunters to honor their loved ones for eternity.”  These guys are Alabama game wardens, Thad Holmes and Clem Parnell, and Holmes said, "We know how strange it sounds to people who aren't comfortable around guns, but for those who are, it's not weird at all."
Guns or no guns, this is weird.  It seems to me like you are adding violence to an already solemn situation.  The two men liken it to people who take loved ones’ ashes and spread them from planes or in areas favored by the deceased.  I’m afraid I do not agree with this comparison.  But, then, I am also an advocate of controlling guns and certainly at least partially biased in the matter.
The company started in July and just shipped its first two orders.  If you want to blow your beloved away in a hollow point, it will cost you $850.  There don’t appear to be many restrictions but you can’t use some National parks without a permit.  You can also read the rules of etiquette at this site.  If there are any loved-one-leftovers after loading the shells, the company, Holy Smoke, will return it with your order.  Then you can go on your merry way firing family all over town.
And speaking of stupid gun ideas, watch the following Rick Perry comment:
My intention here is not to dishonor the dead, rather, to point out the fact that the macabre love of guns has taken a new and hilarious turn that does seem to fit the personalities of some zealous gun nuts.  My question is how Wayne LaPierre, Exec. V.P. of the National Rifle Assn., will react to this move.  The NRA has had its share of ridicule and this seems to be just another of those good-ole-boy zany ideas.
Thad and Clem say they have interest from law enforcement, fire departments, the military, even those interested in memorializing their pets in this manner.  Far be it from me to put down a couple of ambitious entrepreneurs, especially when the economy is faltering the way it is.  Particularly when Alabama comes in 45th in the nation for average income.  Also, you might be interested that Daily Beast ranks the state 10th in the “most armed” classification.
It begins to look like there is no stopping the appalling love for guns, and the owners and their constant crutch, the NRA, from having them in all settings of our every day lives.  But it is also hard to understand how, with the daily reports of gun violence across the country, these self-centered, unconscious fakers can continue to spout…there aren’t too many guns out there.
at October 06, 2011