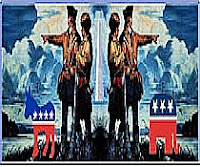 In Democrat or Republican party partisan primaries, you vote and the top vote-getter from each primary wins, going on to the general election.  In Arizona, as in most states, that is the way it is done today.  But in the Sunshine State, extremist politics slant the system toward candidates that may not actually be the choice of the people.  There is a movement on to correct this with the recent surge of Independent voters.
The Open Government Coalition ofArizona is proposing a single-primary system open to all voters where the two top vote-getters, even if they are from the same party, would advance to the general election.  This primary would completely eliminate party selection as a prerequisite for voting.  The coalition feels it will bring more Independent voters into the fold, thus, making it a more popular vote than the current system.  In Arizona, Independents number 32.5 percent of voters.
As it stands now, an Independent voting in the primary must pick one party’s ballot and go with it all the way.
The Open Government Coalition is run by Arizona Democrat and Republican business leaders which tells us that the higher-ups are just as fed up with the state’s political extremists as the average person.  The movement started this past spring with organizers’ aversion to state politics moving to the far right.  It is this conservative right wing political manipulation that has “kept us on the front pages,” says former Phoenix Mayor, Paul Johnson.
The coalition plans to start collecting signatures this month to get the issue on the 2012 ballot.
Is it just a ploy to move Arizona politics further to the left?  Now that’s not a bad idea either.
Read more here.
at August 30, 2011