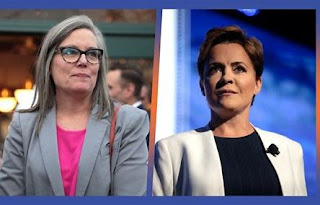 I can understand why Katie Hobbs would refuse to debate an air head like Kari Lake. In a one-sided, no-substance quarrel, it would be Hobbs against a no-substance nonentity with Lake continuing to spout nonsensical illusions over a stolen 2020 election. It's a broken record and in this case the jabbering should be deep sixed. Yet, there is no depth where Lake's blathering would be accommodated. But, and there is a but here...is there a good reason for Hobbs to debate?

Katie Hobbs is currently struggling in the polls, and many believe a one-on-one with her would show Lake to be the idiot she is. Even in Arizona, Trump's backing could be a drawback for some as the undercurrent here is a softening on the former Oval Office maniac. After all, Joe Biden did flip the state in 2020, something that shocked Republicans as well as Democrats. Lake also has the repeal of Roe v. Wade baggage among confused Arizona voters.

Should Katie Hobbs ditch debate with Kari Lake?...
I can see Hobbs now in her clash with her lunatic opponent, Lake, ranting and raving over the recent Mar-a Lago raid for Trump classified documents. She actually took a day off railing over the stolen 2020 election. Yahoo/News take...

"It was, Kari Lake told us, “one of the darkest days in American history”.

"Akin, apparently, to the attack on Pearl Harbor and the assassinations of Abraham Lincoln and Martin Luther King.

So much for the displaced drama. Meanwhile, Katie Hobbs quietly waits for 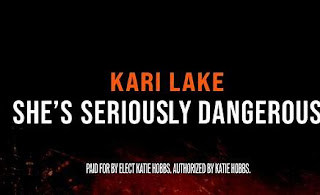 her moment in the debate and when she is able to jump in exclaims, 'why don't we talk about your issues for a better Arizona?' Kari Lake was stunned, as she began to wave her arms in the air exposing her Primary gimmick, armpits. But she couldn't utter a word, 'what the hell is this woman talking about, issues for Arizona?' she thought. Bewildered, overwhelmed, she remained speechless.

Katie Hobbs finished the debate laying out her plans for Arizona while a seething Lake seemed to just be "melting down" behind the podium.