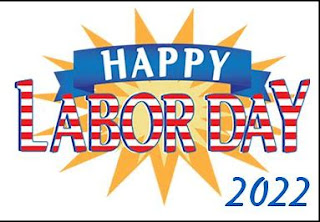 It's not just a day off from work, folks, it is a day that represents a near rebellion over working conditions dating back to the 1880s. It was a Pullman strike in 1894 that started it when President Cleveland dispatched federal troops to Chicago to enforce an injunction against the strike...

With the arrival of federal troops, the Pullman strike turned bloody, with some rioters destroying hundreds of railroad cars in South Chicago on July 6, and National Guardsmen firing into a mob on July 7, killing as many as 30 people and wounding many others.

The American Railway Union (ARU) had been formed earlier with 3,000 members and its head, Eugene V. Debs. Eventually, "125,000 American railway workers on 29 railroads had quit work rather than handle Pullman cars. The Pullman strike shut down rail traffic and commerce in 27 states stretching from Chicago to the West Coast, with Debs and four other ARU leaders arrested, later released on $10,000 bond. More on Eugene Debs later.

The Pullman Strike of 1894 Explained: US History Review...
I cannot begin to count the hours I spent in Pullman cars from a toddler up into my teens. My father was an executive on the Illinois Central Railroad and we always took this method to travel. I have to admit the clackety-clack of the steel wheels on the iron rails was very soothing and did put me to sleep. We relocated every two years as my father moved up the ladder, and also due to the fact he was instrumental in building railroad bridges across the country.

And back to Eugene Debs, following his arrest the ARU was disbanded. Debs, however, went on to become the leader of the nation’s growing socialist movement, running for president five times on the Socialist Party ticket. The railroads did survive, only to run into tough competition years later by the trucking industry and the airlines. But, railroads are expected to expand at a compound annual growth rate (CAGR) of 4.4% from 2022 to 2030. My father would be pleased. 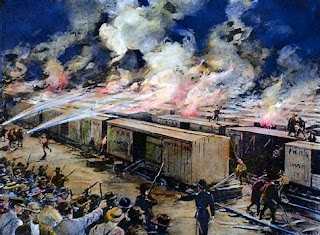 If you would still like more information on the real meaning of Labor Day, here are three sites:

How a Deadly Railroad Strike Led to the Labor Day Holiday

Who started Labor Day? The bloody and confusing history of an American holiday
at September 05, 2022