How to make sure your November mail-in vote is counted 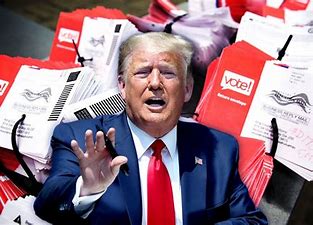 The U.S. Postal Service, under the control of Postmaster General Louis DeJoy, was appointed because he is a big supporter and donor to Donald Trump's campaign. He is single handedly dismantling the Post Office for the sole purpose of preventing the mail-in votes to arrive on time. As an example, DeJoy has started removing sorting machines from several locations, the lifeblood of these facilities to direct mail to the right people on time.

Remember the guy at the New York post office hand-sorting mail when he found the letter to Santa Claus. Without sorting machines all offices revert to this method which drastically slows down the process. In keeping with his changes, DeJoy has notified 46 states that their mail-in ballots may not arrive on time to be counted. Just what Trump ordered. I did a post yesterday with my solution to beating Donald Trump and Republicans on this issue...


"States must send out the mail-in ballots earlier than normal to compensate for slow mail delivery. I would suggest you contact both your Senator and representative, using the following sites:
U.S. SenateU.S. House of Representatives
In keeping with sending ballots out early, states should extend the date for receiving them, again, to compensate for a slowed down postal system. Put this in your note to your Senator and Congress person."

CNN reports that Pennsylvania is already considering extending mail-in ballot receipt by three days. Of course, Pennsylvania's governor, Tom Wolf, is a Democrat, but states with Republican governors can be pressured, or as I said in my earlier post, shamed into doing the right thing. Also, RepresentUS has a site, "How to Vote by Mail this November," with information on each state. Give them your email and they'll keep you updated. BE SURE AND VOTE IN NOV.