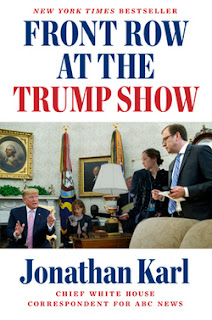 I just finished "Front Row at the Trump Show," and like a good mystery novel, you just can't put it down. Jonathan Karl has known Donald Trump for over twenty-five years beginning the book with his first trip to New Hampshire just before becoming a declared candidate. As he presses on, there is the Trump real estate con man including all the outrageous activities that went along with this and his exploiting of women.

Karl had a reasonably close relationship with Trump during the 2016 campaign, reporting on the man perhaps being the most guilty ever of unpredictability. The author is quoted re. his first contact with Donald Trump...


"I was a cub reporter for a New York tabloid. He was a flamboyant real estate developer with a scandalous personal life." (To quote Avril Lavigne, "Can I make it any more obvious?")

In one instance during the 2016 debates, Meghan Kelly of Fox News asked him about calling women he didn't like things like "pigs," "dogs," "slobs" and "disgusting animals" on his Twitter account. Trump's reply was, "Only Rosie O'Donnell," which engendered some laughter. Karl is privy to a lot of Donald Trump's relationships either directly or indirectly, so it is clear from his book who he likes or dislikes.

There are twenty-four chapters and each one is packed with a new expose of the man he claims is redefining the U.S. presidency. It's up to the reader to determine just how bad the new profile is. A MUST READ at Amazon.