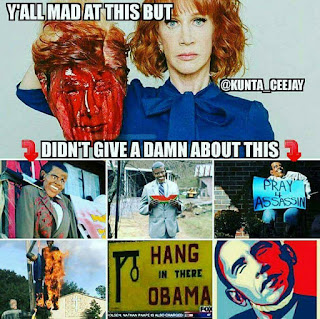 How can the radical right take offense at Kathy Griffin's severed head picture, considering the way Ted Nugent unleashed his numerous hateful comments against former President Barack Obama? Griffin was punished for what she did. Nugent became the White House guest of Donald Trump. Nugent is also a gun nut who, "...went on a rant onstage during a concert and said vile things about both Obama and Clinton, using expletives to refer to both. This lowlife said at a NRA convention in 2012, “We need to ride into that battlefield and chop their heads off in November.”

Back in October of 2012, a North Carolina Tea Party racist hung President Obama in effigy, and took his presentation on a tour around the country, ending up in New York city. I conversed by email with VR Phipps, who was a Command member of the Tea Party from Faison, NC, who denied everything he had done. Including even being a Tea Party member. North Carolina also has concentrations of active hate groups, according to the Southern Poverty Law Center, including Ku Klux Klan, Neo-Nazi, Racist Skinhead, Neo-Confederate, Black Separatist, Anti-LGBT and Anti-Muslim.

But Griffin had this comment re. the Donald Trump bloody head photo...


"...the photo was intended to be in protest of Trump’s sexist words to journalist Megyn Kelly during a 2016 Republican presidential debate, in which he said the former Fox News host had “blood coming out of her eyes, blood coming out of her wherever” when she asked him about his past comments regarding women."

That's not a photo, but it's about as graphic as it gets in terms of text illustration. In Peoplepolitics, Alec Baldwin, who has made a recent career of lampooning Donald Trump on Saturday Night Live is in full support of Kathy Griffin...

“Kathy… f— them,f___them. F— them all,” Baldwin, 59, wrote. “No one believes you meant to threaten Trump. Trump is such a senile idiot, all he has is Twitter fights.”
“Ignore him,” Baldwin continued. “Like the leaders of all the other countries in the world. Ignore him.”

Kathy Griffin is now taking a great amount of flak from Donald Trump and his family, and she says they are trying to ruin her career...


"As a result of the first family bullying her, she has been vilified, getting death threats, fired from multiple jobs and had multiple events canceled," Lisa Bloom, her attorney, said.

Okay, let's get down to the nitty gritty of this whole fiasco. Kathy Griffin posed with a bloody, severed head of Donald Trump, and everyone, including the Secret service goes ballistic, somehow assuming a threat against DT's life. Ridiculous, of course. But a Tea Party nut can hang Barack Obama in effigy while he is still in the Oval Office, parade this around the country including New York city, hardly drawing major attention. Ted Nugent denigrates both Hillary Clinton and Barack Obama and is rewarded with an invitation to the Oval Office by Donald Trump.

Kathy Griffin commented, "This is a woman thing," as is much of what Donald Trump's past problems have been. No one will forget his most famous comment about what a "star" could do to women...

The upside to this whole thing is that Kathy Griffin has promised not to be intimidated by all this; rather, that she will continue to use Trump as fodder for her comedic material. "I'm going to make fun of him more now," she said.