More heads should roll in the Trump administration


Call my headline in poor taste but still considering all the negative media Kathy Griffin is getting, what she did reflects the total disdain for the lunatic who currently sits in the Oval Office. Her act is distasteful because the person in question is the president of the United States and you do not disgrace that office. While in the Navy I complained because I had to salute an officer for which I had no respect. The officer I worked for told me to just keep in mind that you are saluting the rank, not the man. I choose to believe Griffin had contempt for the man, certainly not for the office. 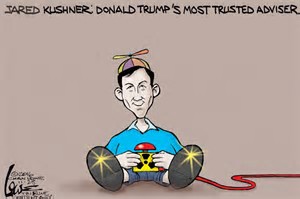 So, to move on, and, by the way, how do those of you who denounce my headline, know I wasn't taking about the recent firing of Mike Dubke, Trump's communications director? I wasn't. Whatever, let's move on to the substance of my headline, those who should be next in line to go, starting with Jared Kushner. We know Donald Trump gloats over his overrated family, whose accomplishments all seem to stem from the Trump name. And there would be no Trump "name" if DT's father, Fred, hadn't given him $14 million to start his real estate enterprise, plus all Fred's business connections.

Now Jared Kushner's father took a different course to success than Trump's; he was convicted of illegal campaign contributions, tax evasion, and witness tampering, and served time in federal prison on his way to his $1.8 billion fortune. And according to Sen. Al Franken, Jared "...may have broken the law with Russia communications." Franken said further...


"White House senior adviser Jared Kushner’s reported efforts to set up a back-channel line of communication between the transition team of President Donald Trump and the Russian government is a 'pretty bad breach,' one that could be against the law and should prompt consideration about a revocation of his security clearance."

Now this is the same thing we have been hearing about lately re. the fact that Kushner proposed a meeting with Russia’s ambassador to the U.S. in order to establish a secret means of communications between the Kremlin and Trump’s transition team that would keep out the U.S. intelligence community. Apparently, Kushner failed to disclose his contacts with Russian officials. Franken commented, “This is a pretty bad breach. These guys, the administration, they're not acting like people who have nothing to hide.”

Another one who should go who seems to be holding on by only his relationship with Trump, is Steve Bannon, who hasn't been in the news lately. Until yesterday, when Trump announced the United States will withdraw from the Paris Climate Accord, a decision most likely provoked by his chief strategist, Steve Bannon. The nationalist won, the U.S. and the world lost. Some say the Paris deal would have hurt the U.S. economy, but Dozens of CEOs have been lobbying President Donald Trump to stay in the deal. China, world's largest carbons polluter stayed in the Paris agreement.

The U.S., second largest carbons polluter, exited the agreement. There were 197 participants, 147 ratifying the agreement. But apparently Steve Bannon's whiteboard explains Donald Trump's climate decision, plus a number of other priorities on the nationalist's agenda that we can look forward to in the future. That is, if he isn't dumped with Kushner. Even the Southern Poverty Law Center says that Bannon has no business in the White House. "We're the platform for the alt-right," Bannon said in July, using a term that is really just a rebranding of traditional white nationalism.

And then there's Kellyanne Conway...what can one say. Here's what Mika Brzezinski of MSNBC said, "White House counselor Kellyanne Conway is not credible anymore, and won't be booked in the future on “Morning Joe.”  The woman can't help lying...look who she works for. If Trump should dump her, there is the possibility that she could replace Kathy Griffin on CNN's New Year's Eve show. Anderson Cooper is going to be desperately in need of someone who can make him laugh as much as Griffin. Conway's stupefaction is classic on all fronts.

If my headline has offended anyone, well, that's life under the Donald Trump administration.