Obama: Tied for 1st place in role of modern presidents 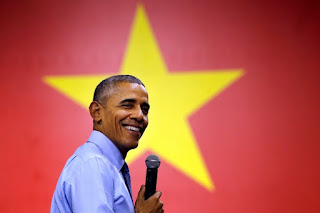 President Barack Obama is in a tie with former President Ronald Reagan now but will eventually surpass him in the role of greatest American Presidents. Obama has surged in the past few years, as Reagan has lost five points. This compared to Obama's nemesis, Mitch McConnell, who has been voted most unpopular U.S. Senator, plainly illustrating the lack of class in the latter.
at January 28, 2017