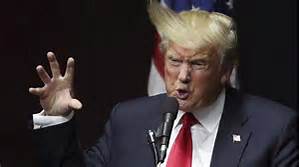 They say truth hurts but in Donald John's case it is a wound that is festering to the extent that he can't attend to the business of this country...the reason for which he was apparently elected. The comparison of his much smaller Inauguration crowd size compared to Barack Obama's in 2009 is just the latest. It's all staged by Steve Bannon who, along with Kellyanne Conway, have now given us "alternative facts." But the media just isn't buying it.
at January 29, 2017