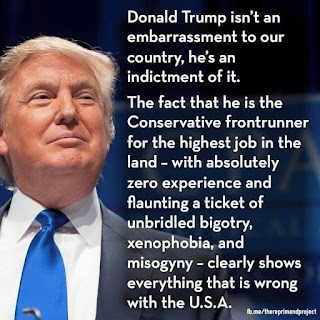 Contrary to belief, Sigmund Freud did not employ the use of the term ego (a person's sense of self-esteem or self-importance) or id (the part of the mind in which innate instinctive impulses and primary processes are manifest). He had other references, unimportant to this post. They both seem to date back to the time of Nietzsche but the reason for bringing any of this up is to point out the fact that Donald John's ego is completely out of control and his id is that of a lunatic. Just take a look at the following from Ashley Parker of the Washington Post:


"Even with British Prime Minister Theresa May standing at the lectern just to his right Friday, the new president used his first joint news conference with a world leader to underscore that while his campaign message may have been 'America first,' his actual guiding philosophy is more 'Trump first.'”