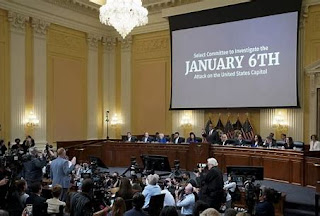 Have you been watching the insurrection hearings from the Jan. 6, Commission? Republican Liz Cheney has done a remarkable job of illustrating Donald Trump's commitment to the demolition of American democracy. He promoted, then perpetuated, the insurrection of the U.S. Capitol on January 6, 2021. Cheney, with a long lineup of Republican and Trump-loyal witnesses, has all but indicted T-rump, but the expedition to justice isn't over yet.

I've said before that I agree with little of the Republican ideology Cheney believes in, but I do believe sincerely in her commitment and determination to bring Donald Trump to justice. She is literally sacrificing her career in the U.S. House to get this job done. And it is tragic that she won't have the chance to work on the committee after the first of the year. Unless...there is a miracle. The latest polls show she is behind the Trump supported contender by 22 points. Ugh!

And while working on this post yesterday, Donald Trump and Mike Pence came to Arizona to do battle in our Republican governor's race. It features two misfits, Kari Lake and Karrin Taylor Robson, but then, Arizona is used to oddballs for this office. Remember Jan Brewer and now the current Doug Ducey, both of which leave much to be desired in the brains department...

"The dueling appearances underlines the importance of Arizona on the national stage, with the 2 August primaries likely to serve as a litmus test for Trump’s endorsement prowess ahead of the midterms, where the Republicans hope to win key state races and regain control of the Senate and House."

Jan. 6 Hearing Room Laughs At Video Of Josh Hawley Fleeing Capitol Riot...
But the real point in contention is, did the January 6 committee prove its case? CNN has "A point-by-point breakdown of its major claims and the evidence presented:"

"President Trump summoned the mob, assembled the mob and lit the flame of this attack."

"While the violence was underway, President Trump failed to take immediate action to stop the violence and instruct his supporters to leave the Capitol."

"You will see that Donald Trump and his advisers knew that he had, in fact, lost the election...President Trump corruptly pressured state legislators and election officials to change election results."

"You will see that President Trump corruptly planned to replace the Attorney General of the United States so the U.S. Justice Department would spread his false stolen election claims."

"...we will focus on President Trump's efforts to pressure Vice President Mike Pence to refuse to count electoral votes on January 6th...in private and in public."

At the age of 89, one has a very different perspective on the above. It's not hopeless, it's really a contentment.

NEXT: What to expect and more from the Jan.6 hearings on the Capitol insurrection by Donald Trump.