John Blake of CNN calls White Christianity Nationalism an "imposter Christianity" and exclaims it "is threatening American democracy." I grew up in a racist Tennessee but in the late forties and fifties it was simply the way things were. After witnessing my first lynching of a black man, I determined this was not something I could live with and thereafter made it clear I was anti racism. didn't sit well with many of my friends and I would eventually move out of the South for good.

The words racist and racism weren't even a topic of conversation, at least in that part of the country, in those days; just accepted cause that's the way it had always been. And, it still is, after tons of legislation to prevent it, but as the saying goes, 'you can't legislate morality." And racism is by no means restricted to the South, as Blake points out...

"The insurrection marked the first time many Americans realized the US is facing a burgeoning White Christian nationalist movement. This movement uses Christian language to cloak sexism and hostility to Black people and non-White immigrants in its quest to create a White Christian America."

"A report from a team of clergy, scholars and advocates — sponsored by two groups that advocate for the separation of church and state — concluded that this ideology was used to "bolster, justify and intensify" the attack on the US Capitol."

There is a picture of a group at the Jan. 6 insurrection gathered around a large 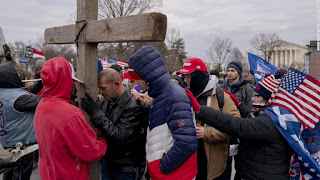 wooden cross with one man hugging it. A caption says, "Demonstrators pray outside the US Capitol in Washington on January 6, 2021." But I say these moronic traitors are offering themselves up to their false idol, Donald Trump. You have to be Godless to do what this insurrectionist gang did at the U.S. Capitol. Now, define White Christianity Nationalism...

Paul Gorski says..."it is an ideology based on a story about America that’s developed over three centuries. It reveres the myth that the country was founded as a Christian nation by white Christians and that its laws and institutions are based on Protestant Christianity. White Christian nationalists believe that the country is divinely favored and has been given the mission to spread religion, freedom, and civilization. They see this mission and the values they cherish as under threat from the growing presence of non-whites, non-Christians, and immigrants in the United States."

This is what it means to be a 'White Christian nationalist'

These days, it seems that anything bad has a connection to Donald Trump and his MAGA movement. But speaking of Paul Gorski, he and Samuel L. Perry have a new book, The Flag and the Cross, where they closely "scrutinize" white Christian nationalists. Gorski and Perry believe that these people "share a set of common anti-democratic beliefs and principles."With T-rump as their leader, this makes complete sense while at the same time is terrifying.

Perry says there is a wide distinction between whites and people of color. I have a vivid picture of that from an experience from the state of Mississippi. My aunt and uncle had two 500-acre plantations and the caretaker was a black man named Man. In addition, he managed and was the butcher at my uncle's grocery store in the tiny town of Como, Mississippi. Man called me Mr. Jack and on several occasions we had long conversations; at the time I was only seven or eight.

When Man would come to my Uncle's house, he would always go through the side yard and come through the back door. I asked him once why he didn't just come through the front door. He answered me, 'Mr. Jack, I know it seems strange to you but that's the way it is here. It just makes it easier on everybody if I use the back door.' I didn't fully understand then but as I got older it became clear, blacks did not have the same rights as the white folk. It became repulsive and has never changed.

You won't be disappointed if you read both of these articles, unless...you are a White Christian Nationalist.

At the age of 89, one has a very different perspective on the above. It's not hopeless, it's really a contentment.