The Case for the Second Amendment

This is the 2nd Amendment as given to us by the Founding Fathers...

A well regulated Militia, being necessary to the security of a free State, the right of the people to keep and bear Arms, shall not be infringed. 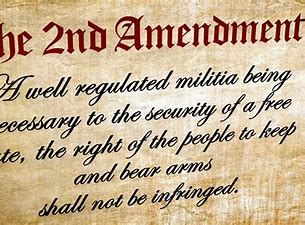 Now, let's look at that. Is the "well regulated militia" a state national guard or is "State" meant to represent the U.S. and "militia" the military? This makes a big difference in the interpretation of this amendment. And, the national guard or military "being necessary to the security" of either sounds like we are talking about a group rather than an individual. Of course, all of the discussions and negotiations of the 2nd Amendment were taking place before its passing, December 15,1791.

But then we have, "the right of the people to keep and bear Arms," which could be plural, referring to a group of people. What I am getting at here is that the 2nd, as it is written, is far from clear if it represents groups or whether it could include individual gun ownership. Finally, "shall not be infringed" is relatively simple and means the amendment cannot be violated. But it is still to be established whether this 200+ year old measure asserts singleness or government control.

It must be acknowledged that a law that is 200 years old, plus written at a time when there was no established law enforcement--resulting in potential instances of self protection--could need a more modern interpretation. Additionally, the United States over the last few years has shifted to a gun culture designed and implemented by the NRA's Wayne LaPierre that produces maximum profits for gun manufacturers and lines LaPierre's pockets with millions of dollars? 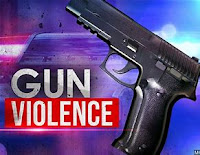 this country that is rocked daily by gun violence. According to the Gun Violence Archive, there have been almost 22,000 gun violence deaths in 2021, including 315 mass shootings. There are 390 million guns on America's streets with the current U.S. population 329 million. America comes in second in firearm-related gun deaths around the world with 37,200 annually; Brazil is number 1.

But is there a case for the 2nd Amendment? I will leave you with the above facts and figures plus a number of sites, below, relating to guns starting with the mass killings in Colorado and Georgia, in March of this year, and ideas on how to stop all this mayhem...

Opinion | 6 Bold Ideas for Gun Reform That Could Actually Happen 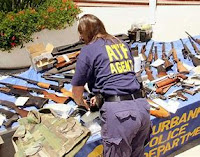 After repeated ATF warnings, gun dealers can count on the agency to back off; sometimes firearms flow to criminals

213 Mass Shootings Later, What Has Biden Done on Guns?

At least 22 people shot, 2 fatally, after assailants get out of an SUV and fire assault rifles at a club, police say

Gun deaths surge in Iowa ahead of loosened handgun restrictions
Yes, the 2nd Amendment had its place in its day, the days of 1791, but this is 2021, and that need is no longer viable. Gun violence has consumed America due to a gun culture fostered by the National Rifle Assn. and supported by a large array of gun nuts. The time has come for change.
at July 06, 2021