Animals to Humans: All we want is to live

When you look at a kitten or a puppy and its cuteness just makes you melt, it can also make your day. But what about their day...and future. There are 3,400,000 cats in shelters throughout the United States and 4,200,000 dogs join them. But the sad fact is 1,300,000 dogs are euthanized each year, along with 1,400,000 cats. Some of these euthanizations are due to health reasons but the rest, well, they went over the rainbow bridge when they could have had forever homes. 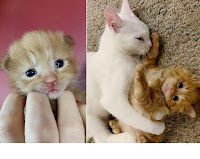 As an example, Moana came to the A Bigger Purpose Kitten Rescue in Hellertown, Pennsylvania from a hoarding situation, and in this new positive environment had her kitten. Yes, Just one. Mom was "unsocialized and very fearful of people. To help her decompress, they provided a quiet place for the duo and plenty of food for the mom." Pua, her kitten, was well taken care of but mom developed medical problems so the little one had to be bottle fed. Read more...
Here's a great story for those who have lost family members, but first a warning. Most domestic pets are not meant to be outside animals. Where I live in Arizona, I have seen hawks carry off cats, even small dogs and you don't want to hear what coyotes can do. Cats must definitely be kept inside and dogs should be let out, watched, and brought back inside. That said, Brandy disappeared after she went to the backyard one afternoon, her owner, Charles, reported. Fifteen years passed...

She "was in rough condition when the pair reunited, having been malnourished with harmfully long nails.

The story a lesson for the wandering Brandy and Charles to keep tabs on all his animals in the future.

A horse form in Scottsdale, AZ, is adding dogs to its list residents...

"Part of the farm will be transformed into a hotel for dogs who belong to members of the Valley's homeless population. The dog hotel will provide a safe space for homeless pet owners to leave their furry friends while they seek treatment and get back on their feet."

Talking about filling a need. The homeless population continues to grow in this country but not many consider that many in this group also have pets, mostly dogs for protection. When it becomes impossible to care for them, they now have a place in Arizona to help. This is an idea that should be shared nationwide, with the purpose of at least establishing one of these facilities in each metropolitan area.

A pregnant cat found herself in a difficult situation when her family no longer wanted her. A 12-year-old girl saw what happened and offered to take the cat, so she wouldn't end up on the streets in the middle of winter.

This is such a tragic story when a family decides they don't want their pet, then makes the decision to abandon the animal to live on its own, pregnant in this case. This is inhumane treatment and maybe someday there will be justice when lawmakers see fit to protect animals with laws. A Montreal rescue took the mom in and Sylvia, a volunteer, took it from there. "Gisel quickly warmed up to her Foster Mom Stef when she realized that she was safe." Her baby, Pruno, was born.
You find them everywhere, this little guy under the porch who was so hungary that he temporarily forgot to be scared of the people rescuing him in Dorset, Ontario, Canada. Scruffy, with help from the rescue, was on the road to socialization but desperately needed a hand from another cat. Just a month prior Maple had come to Dorset Rescue Kittens from a large feral cat colony in Haliburton. 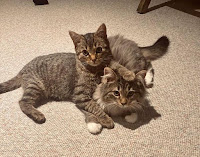 Maple was also shy and because of this missed several adoption opportunities, lacking the understanding that humans could be her friend. When Scruffy arrived, she Rescue decided to introduce the two and "When Maple came out of her carrier, the two tabbies instantly connected -- it was love at first sight." This included Scruffy following Maple behind the toilet when she was scared. And that's all it took, the two being together, trusting each other. Read more...
And here's the tough one, a kitten with special needs; Swan's (also named Panda) mom was too young for kittens so the little one developed slowly as the runt of the litter. The rest of the kittens were fine and soon became very active but "Swan couldn't keep up with them. The sweet ball of fur spent most of his time napping and snuggling with his people." This is how LoveMeow describes him...

"At eight weeks old, he was the size of a 4-week-old kitten. His ears were still folded and his legs were short and stout."

With concern the caretakers from The Mad Catters took him to the vet and tests revealed Swan had hypothyroidism, which had slowed his growth leading to traits of dwarfism. Then came the right medication resulting in significant improvement. LoveMeow describes Swan's development...

"With an official diagnosis and the right medication, things quickly 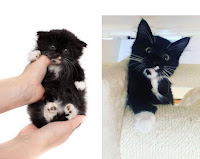 improved, and the little panda kitty began to put on weight. He had a voracious appetite and was getting more adventurous each day."

To make a long story short, Swan progressed so that he could keep his own with the other kittens and now he is "ruling the roost." Read more...

SUPPORT YOUR LOCAL ANIMAL RESCUES AND HUMANE SOCIETY
at March 03, 2021