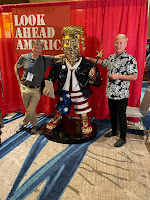 When first seeing this, my wife asked me, "Have these Trump adoring Republicans always been this insane?" It's a reasonable question when witnessing the parading of a cheap, gaudy gold statue of Donald Trump through the halls of the CPAC convention. It's even too ridiculous to be considered a false idol as Exodus 20:4-6 in the Bible depicts it...

This pretty much covers what Trump thinks of himself, and of course his endearing followers. But is this pathetic adoration as far as it goes, or does this behavior signal the final breach with reality in the Donald Trump chump following?  There were probably hundreds of hugging worshippers, and you have to wonder if these double-digits knew how absurd they looked, or has the passage from the Bible, above, become reality with Trump as the Messiah? And this includes evangelicals.

And, was the statue even displayed during Trump's speech? In the short amount of time I could stomach watching it, no. Tommy Zegan, the artist behind the gold monstrosity says he tried to present it to Trump at Mar-a-Lago with no success. Is it possible that Donald Trump is distancing himself from a likeness that looks fat and bloated and which is carrying a gold star? Zegan says he could probably get $100,000 for it. Probably tome to cut his losses and hope history is kind.