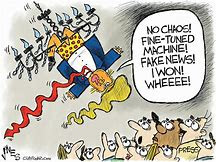 Donald Trump's sending of troops to the U.S. Mexico border could cost taxpayers $200 million by the end of this year, and barring any violence, what exactly will they do? it is obvious this move is entirely for the purpose of cementing a Republican base that has put immigration as the number one issue in this election. But there is definite hope in the turning of two GOP seats in the Senate, necessary for a Dem majority. First, the early youth vote in Texas for Beto O'Rourke running against Ted Cruz. Second, Kyrsten Sinema is running ahead of Martha McSally in Arizona for retiring Jeff Flake's seat. Although the House appears to be turning to the left, Democrats must hold on to all current seats.

There isn't much time left for decision making but if you are wondering sitting there on the fence, just think of the last two years under Donald Trump and Google "Donald Trump stupidity." You will get over 5-million  sites, most of which represent a huge embarrassment to this country. In them are some of the most bizarre antics for even the lowest form of individual, must less the President of the United States. Then go vote!