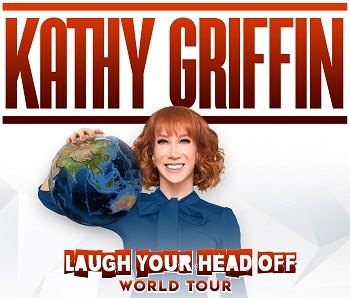 My wife and I attended Kathy Griffin's performance here in Phoenix last night and it was non-stop laughing for over three hours. Yes, this amazing woman knocked off one hilarious joke after another with subjects ranging from Kim Kardashian to Donald Trump, with Donald getting the most attention. You might think the Donald Trump severed head incident would have at least slowed her down but after some very insightful time following a couple of pity parties, she basically said 'screw it' and hit the road with her new world tour. Guess what is the center of her three-hour act...the Donald Trump severed head incident.

She railed on Sarah Huckabee Sanders for a while and pretty much confirmed that she is the biggest liar in the world alongside her boss, Donald Trump. There were several quips on the Kardashian's and a lot of Hollywood gossip that only and insider like Griffin could know. But the main thrust of it all was how Kathy Griffin has been ostracized from tinsel town. Fired from the CNN New Year's Eve show and 25 performances of a scheduled tour were cancelled. Her current trek around the country was organized by her close friend and contrary to the comment from a show business big wig that she would never draw a crowd again over 500, there were over 1,800 at the Phoenix Symphony Hall.

Kathy told of how the Justice Department tried coercing to allow them to photograph her in a jail jumpsuit in handcuffs being led off to jail, to which she responded, "No fuckin' way." It took two months for her attorney to negotiate out of that; as it turned out, she had committed no crime, thus, no charges. By the way, my wife isn't fond of the "F" word, but she laughed at its use repeatedly during the show. It seems to not only fit Kathy Griffin's humor but actually compliment it. Wherever you are in the country, if this class-act comedienne comes to town, don't miss her!