The NRA can be taken over by children. Here's how. 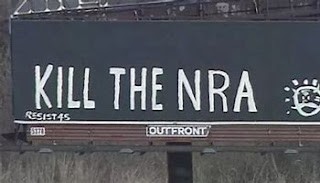 Why not? Children are the only age group that appears intelligent enough with the desire to pass reasonable gun control legislation. Certainly not the idiots that populate the U.S. Congress and absolutely not the lunatic in the White House. GQ reports it would take about 350,000 new members joining the National Rifle Assn. to out vote the bare 6 to 7 percent who currently vote on NRA issues. Enlist Michael Bloomberg founder of Everytown for Gun Safety to underwrite the $12,250,000 necessary to pay the dues of the 350,000,000. Once they are in they can take over the NRA by vote.

Call a vote and fire the current board, electing one from the new members. Then, the new board votes to oust its Executive V.P. Wayne LaPierre. Next, the board fires the staff of the National Rifle Assn., selling its building and other assets, donating it all to the cause of gun control. Some of the proceeds could be used to reimburse at least some of the $12.5 M Bloomberg extended for memberships. Finally, the board votes to dissolve the NRA and retires its name in a way it can never be used again. This could be a neat package to get rid of much of the gun violence by disposing of the NRA.