Why did this gun massacre happen in Florida? 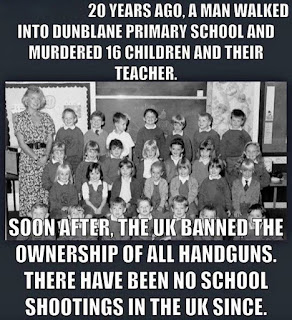 Michael Tomasky of The Daily Best says it is because of its, "..."certifiably insane gun laws." All of them, of course, compliments of the National Rifle Assn. with its premiere gun lobbyist, Marion Hammer. Right now, Florida has 11 gun-related bills on the 2018 calendar. The ones that are pro-gun rights will pass. State Senator Greg Steube, R-Sarasota has filed five bills to make it easier to buy a gun. Can you believe that? Right now all you have to provide in Florida to purchase a weapon is a warm body. What could possibly make it easier.

These people are certifiably crazy, the epitome of gun nuts, and the ones behind the gun massacre in Parkland where 17 people were killed by an AR-15 assault rifle. They are totally responsible, along with lax restrictions on the mentally ill buying a gun, thanks to Donald Trump. Here's a quote from The Daily Beast...


"The gun laws of Florida are sick. Carry in vehicle? Yes. Must notify officer? No. Carry in state parks allowed? Of course. “No weapons” signs enforced? Nyet. Nearly 1.8 million Floridians have concealed carry permits, and 36 other states honor those permits."

This is the biggest problem in the U.S. today and if not dealt with soon, we could see schools close because the children's parents are afraid to let them attend. It's a threat worse than terrorism.
at February 18, 2018