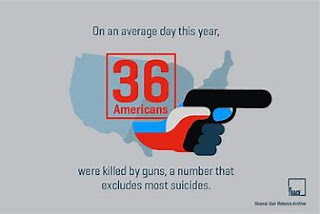 Folks, that's 120,130 more deaths by guns in the United States since just 1968, compared to dating all the way back to the Revolutionary war in 1775 for the war deaths. This is horrendous and if the American public can't understand that, then it has completely lost its ability to come to reasonable conclusions.
at February 23, 2018