Florida congressional votes on gun legislation prior to massacre 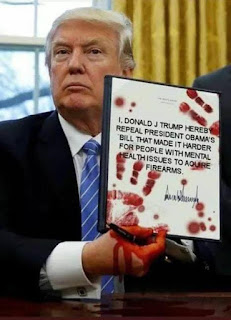 Nikolas Cruz walked into the Marjory Stoneman Douglas school in Parkland, Florida on Wednesday, February 14, and massacred 17 students and teachers with an AR-15 assault rifle. For the record, Sen. Marco Rubio, a Republican, who has received $3.3 million from the National Rifle Assn. has voted across the board to loosen gun restrictions on mental health, the Feinstein Terror gap, background checks, gun shows and online background checks, and concealed carry reciprocity. Sen. Bill Nelson, a Florida Democrat, who regularly gets an "F" from the NRA, voted to add restrictions in all cases.

The Florida Representatives were no different. Out of 27 House members, 14 voted in the same manner as Rubio, all Republicans. The other 13 Democrats voted with Nelson. If you analyze the voting, tighter background checks and more stringent mental health laws could have prevented this tragedy. So, we can pay our thanks to the NRA for its assist in the killing of these students and teachers. And by the way, it is a very quiet and unresponsive NRA following this bloodbath that has nothing to say about the killings but will continue promoting more guns on the street.

If ever there was an organization that has gotten completely out of control, it is the Nation Rifle Assn. led by Wayne LaPierre. When you're dealing with a greedy Congress that will do anything for the contributions necessary to get reelected, you are simply dealing with a bunch of idiots. The latter is prevalent in everything this gang of deadbeats does, or rather, doesn't do. I am not as sure election reform is the answer; the NRA would just find another way to scare hell out of these nincompoops. We can only hope now that the Parkland young people will achieve their goals.
at February 20, 2018