HOW DEMOCRATS WILL WIN BIG ON NOVEMBER 4 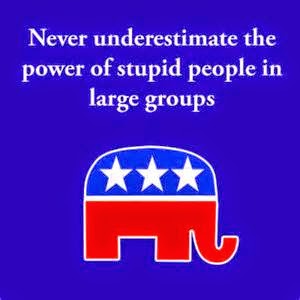 Michael Tomansky in the Daily Beast says, "How Can Dems Be Losing to These Idiots?" in an article that expresses amazement that, "They are running against a party that is as intellectually dishonest and bankrupt and just plain old willfully stupid as a political party can possibly be, and they have developed no language for communicating that to voters." I have said it repeatedly in this blog, citing the Tea Party as the leaders of this revolution of idiocy. Tomansky points out the fact of how few ideas the GOP has to make the country better like nothing on the economy, on immigration or healthcare. For months their only campaign was to get rid of Obamacare, until they realized it wasn't working. Even then, a brainless Tea Party didn't give up on the issue.

Why haven't the Democrats gotten this across to voters? My thoughts are that they have been reluctant to come out of the shadows of a party and its electorate that are bulldozed constantly by the Republican fear, hate and negativity onslaught against a President who is different. Play that any way you'd like. From Mitch McConnell's statement he wanted to make Obama a one-term president to John Boehner's support of a Tea Party that outwardly hates Obama. Look back in history and it's tough to find this kind of bitterness toward any other President. Now, the election is only two days away and it's too late to get the ball rolling.

EXCEPT, if the progressives admit just how lax they have been about the whole situation and come out on November 4, in a crush of voting power that not only retains the Senate but takes back, or at least cuts the majority of the House to manageable numbers.