IS THERE A 2ND AMENDMENT LOOPHOLE? 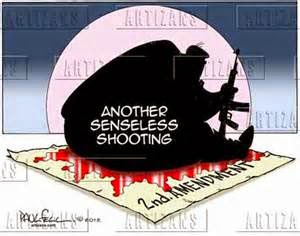 Dictionary.com defines loophole as, "a means of escape or evasion; a means or opportunity of evading a rule, law, etc. The gun show loophole is a perfect example in the world of weapons rights. What we are dealing with for the 2nd Amendment is the fact that the National Rifle Assn., led by wacky Wayne LaPierre, holds it so absolute that there can be no change. Just some slight modification like making universal background checks mandatory. No, says wacky Wayne, it takes away the rights of gun owners, which kind of indicates to me some of his NRA members couldn't pass background checks.

In fact, 74% of NRA members support background checks so that would indicate that wacky Wayne LaPierre doesn't represent his membership, rather a gun industry vehemently against it. Yes, and 89% of the American public supports background checks so why can't we get it done? Because the NRA's gun lobby fills the pockets of Congress, thus, their complete hands off the issue. Okay, we can't get Washington to do anything, and many states like Arizona and Florida give guns to just a warm body, so we have to find the loophole in the 2nd Amendment. Someone with a good enough legal mind to bring this outdated legislation forward to the 21st Century.

Gun nuts will think I'm crazy and actually that's a compliment coming from them, but I am perfectly serious about this venture. Hopefully it will encourage others out there to take up the crusade, write about it, and with enough networking get a forum to revise or appeal the Constitutional Amendment that is being used by wacky Wayne LaPierre to allow the slaughter of school children and other innocent people. To start the ball rolling I am opening a debate that has been going on for several years comparing the 2nd Amendment to the 1st Amendment. The premise is that, if the 1st can be interpreted with certain parts being changed to fit the situation, why can't it also be done with the 2nd?

As an example, in the First, we have freedom of speech but can't commit libel or slander, same for perjury, or download child pornography. In other words there are corrective mechanisms, even to Amendments to the Constitution. I urge you to read an article by Barry Lyga that takes this very approach into consideration.

This my first post on this subject with more to come.