This never occurred to me when I wrote about the gun worshippers out there that value their firearms over life itself.  These are the die-hard fanatics that refuse to negotiate at all over even the smallest new gun control laws.  Fanatics like Wayne LaPierre who heads up the National Rifle Assn. (NRA), this country’s major obstacle to enacting sane, reasonable gun control legislation.  But Rabbi David Saperstein said on CNN, “The religious community is capable of ‘mobilizing people to be a political force that we have done on issues of conscience since the beginning of this country.’”
The bells of the Washington National Cathedral rang 28 times recently to honor the 28 dead in the Newtown, CT shooting.  At the same time, wide spectrums of religious leaders were asking their congregations, President Obama and congressional leaders to do something about the gun violence that has overtaken the country.  Consisting of evangelicals, mainline Protestants, Catholics, Jews, Islamists and Sikhs, they want the outlawing of assault weapons and high capacity magazines, tightening the access on all guns and improved mental health care.  Who could argue with this, except wacky Wayne?
Rev. Gary Hall, dean of the Washington National Cathedral, said, “Everyone in this city {Washington} seems to be in terror of the gun lobby. But I believe the gun lobby is no match for the cross lobby.”  Rabbi Saperstein, primary organizer of the event and director of the Religious Action Center of Reform Judaism added in quoting from Leviticus 19:16: “Do not stand idly by when your neighbor’s life is threatened.”  Then the Rabbi asked himself a question and answered it.
“Is the need for sensible gun control a religious issue?  Indeed, it is, for our worship of guns is a form of idolatry, the random distribution of guns is offense against God, and the only appropriate response is sustained moral outrage.” 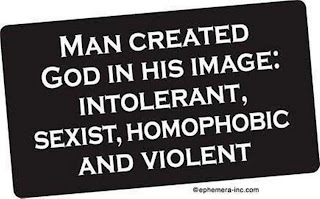 What the religious right extremists
would have you believe
And as you might expect, the religious right extremists “have found a new demon to slay: gun control,” reports the Sothern Poverty Law Center’s Hatewatch.  Quoting this group:
“It might seem odd that those who profess allegiance to the teachings of Jesus Christ would be so vociferous about making sure that Americans have continued, unfettered access to assault rifles. But in the wake of the massacre of schoolchildren in Connecticut, which ignited the most heated debate about gun control in this country in a decade, some of the religious right’s most rabid voices are joining the fight.”
This clearly underscores my admonition that these gun nuts love their guns more than the adults and children they kill.  To Bryan Fischer, atty. for the American Family Assn., Barack Obama is “blatantly disingenuous when he says he believes in the Second Amendment.”  Hatewatch also reports that Fischer is the guy who claims:
“…that Adolf Hilter’s Nazi Party relied on gay men because of their innate brutality, to turn {that} debate straight on its face.  Not only has he banned the use of the words ‘assault rifles’ on his Focal Point radio show in favor of ‘sporting rifles’ – and threatened to fine any member of his staff who uses the wrong term – he has defined the debate on gun control as a thinly veiled plot to target Christians.”
These people are obviously nuts, but considering their close ties with the National Rifle Assn. (NRA), it is easy to understand where all this vicious doctrine comes from.  It is unfortunate that we have all these crackpots out there spouting off on a subject that needs sane minds in control.  However, I do not believe these fanatical efforts will undermine what the mentally sound religious leaders are proposing.  And that is what the majority of Americans want.  They want reasonable gun control that will stop the gun violence that is sweeping the country.  And they want it now.
at January 31, 2013